Q. Peace and Much Love… How are you today?

Q. You got any spe­cial diet­ary require­ments?

Q. The show was super fresh- how did Lon­don receive you today?

Apollo Brown: It was my first time in Lon­don, and we’ll be back as soon as pos­sible. The Reac­tion was amaz­ing… everything about it man- they were hype! They respon­ded amaz­ing. Can’t com­plain man it was really dope. I was humbled, very happy about the show, and being here.

Verbal Kent: Its easy when people are happy and wanna have a good time man. All we have to do is do what we Love to do. The response is genu­ine and recip­roc­al. It’s easy when there’s Love involved.

Q. I hear that. What pro­jects you got com­ing up?

Apollo Brown: We got some new mater­i­al for 2015, and we got our solo stuff going on, you know?

Apollo Brown: I’m gonna stay with what I do. I make it accord­ing my mood, how I’m feel­ing in the moment. I don’t really switch it up with this type of sound. Whatever comes to mind. I’m fin­ish­ing this instru­ment­al album that’s more, I guess dirty, and less drums… Along the lines of a score or sound-track. I’m known for a cer­tain style I guess.

Q. Tell us again where you’re from…

Q. How does that trans­late when you’re over here in Lon­don, which is quite a dif­fer­ent cul­ture?

Verbal Kent: you can come to a dif­fer­ent coun­try and rep­res­ent your ter­rit­ory, fla­vours and atti­tudes. Your per­form­ance is based on who you are.

Red Pill: Hip Hop is in a great place. I don’t hate the shit, but main­stream rap in Amer­ica has been a par­tic­u­lar sound based on mater­i­al­ism and shit but every­body parties and does what they do.  I think with the under­ground mak­ing its way to the main­stream, people want a change of pace. If you go ten years with the same sound… you don’t wanna listen to that shit any­more. Doesn’t mat­ter if its Golden Era Hip hop or Trap South shit. You know what I mean? As far as white rap­pers… Every White rap­per hates every White rap­per… you gotta have an aware­ness of who you are as a per­son.

Verbal Kent: What does that mean!? You real­ise this is an inter­view right!?

Red Pill: There’s a lot of White rap­pers I listen to but, I guess I don’t hate them but; I think there’s scep­ti­cism with White rap­pers. You should treat me in the same way cause, um… Its like, rock n’ roll in the 50’s and jazz music. Espe­cially in Amer­ica I don’t wanna be a part of hip-hop turn­ing all White, I don’t wanna con­trib­ute to that shit. I think that’s a pos­sib­il­ity and that sucks. As a White rap­per I try to have that aware­ness. It’s true to being a human.

Red Pill : You gotta recog­nise the mer­it of both of their philo­sophies on civil rights man.

Q.  You’ve been hailed as a great like J Dilla and DJ Premi­er. Do you con­sider your­self as bring­ing some­thing new to the industry?

Q.  How can I Am Hip Hop magazine help you today?

Q. What inspires you to keep pro­gress­ing?

Verbal Kent: I agree. That is enough for me.

Apollo Brown: Look­ing at the crowd. They’re say­in’ your words, their heads bop­pin… Feel­in’ it with their eyes closed. You can’t explain that you know. When you can make music that people can feel and they genu­inely feel that shit… That’s what keeps me going.

Verbal Kent: That wouldn’t work with 10,000 people. It works with hun­dreds… Its real­ity. To me its like this is per­fect.

Apollo Brown: The people are here for you, they wanna see you. They wanna listen to your music.

Verbal Kent: For the right reas­ons… they made a choice.

Apollo Brown: Tonight is what keeps me doing what I’m doing.

Red Pill: We had a shit travel morn­ing. You get here any everything changes. It changes your entire mood. This is why we do this shit! We get to have fun!

Give Thanks. It was a good show. You all ripped it…. 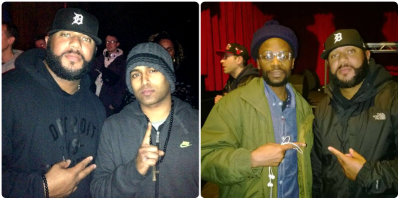 Inter­view by Shva One & Galaxy

Author at I Am Hip-Hop Magazine
Vish is an Emcee, edu­ca­tion devel­op­ment lead­er at the Hip Hip His­tor­i­an Soci­ety and recently, co-dir­ect­or of Every Per­son is Cap­able. He works on Hip Hop com­munity mat­ters and lives to uplift people.

Kickin’ It With Shah Rule (@iamshahrule) !

Vish is an Emcee, education development leader at the Hip Hip Historian Society and recently, co-director of Every Person is Capable. He works on Hip Hop community matters and lives to uplift people.