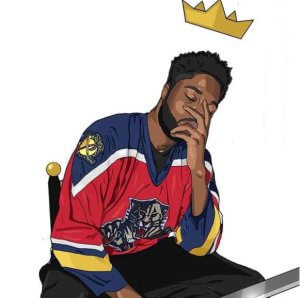 For the past few years, Arthur Bayele, also known as Kiing Arthur, has been carving out a lane for him­self by cre­at­ing quirky hip-hop and animé inspired mashups and post­ing them on social media. A curs­ory look at his Ins­tagram page will show you Drake and Future depic­ted as Naruto ninjas, whilst anoth­er por­trays Kendrick Lamar styl­ised as a Kung Fu fight­er from a retro video game. His art is geared towards being fun, bright and is fre­quently nos­tal­gic.

Recently, we caught up with Bayele to dis­cuss his music, artist­ic vis­ion and of course, animé.

On your debut song, Rol­lin’ (Pink Raiinbow)you said, “they don’t know that the guy draw­ing car­toons com­ing with the bars”. I think that’s a great state­ment of your cre­at­ive out­puts. Can you give us an idea of how many cre­at­ive things you’re involved with?

I tend to dip my hands in a lot of things. I spend most of my time draw­ing, anim­at­ing or design­ing graph­ics for vari­ous things, but apart from that, I pro­duce music for myself and oth­ers. I some­times exper­i­ment with pho­to­graphy and video­graphy as well, most of the things I know I taught myself through tri­al and error. I’m open to try­ing new things when it comes to cre­ativ­ity and I enjoy doing them, there’s still a lot of things I need to learn, and it takes a lot of patience, but with time I’m get­ting bet­ter and bet­ter.

When it comes to music, I’m influ­enced by a lot of dif­fer­ent sounds, like 90s R&B/Jazz, Gar­age, Neo Soul just to name a few. When it comes to the people who heav­ily influ­ence my sound, I’d have to say A$AP Rocky, Isai­ah Rashad and ICYT­WAT are the people I take inspir­a­tion the most from in today’s music. 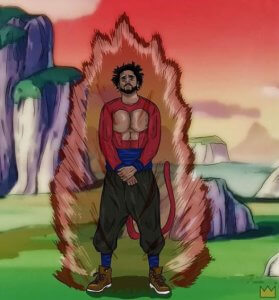 Your art on Ins­tagram blends hip-hop and animé and has garnered you a lot of atten­tion. Can you describe how you approach your art?

I take in a lot of what I see and the main thing I like to do is com­bine real life with my con­cepts. I usu­ally take inspir­a­tion from music videos and pho­tos of artists that I listen to and try to twist it, like turn­ing a scene from a video into an animé. A lot of the things I do are out of curi­os­ity and I try to re-cre­ate the artists I draw as their own char­ac­ters. Once I have an idea of where I want to go with it, it can take me from 3 hours to 2 or 3 days to fin­ish.

You have a pretty eclect­ic pro­duc­tion style —  for instance, on your track Green Hill Zone, you sampled the video game Son­ic Adven­tures. Can you tell me about your approach to music pro­duc­tion, par­tic­u­larly sampling?

There’s some­thing I love about ambi­ent synths and chords, and those are the sounds I tend to use in a lot of my pro­duc­tion. I try and bring people to my world.

When it comes to sampling I grav­it­ate towards a lot of jazz from the likes of Sade, The Blackbyrds and Roy Ayers just the name a few. With Green Hill Zone I got a bit lucky with the Son­ic sample, as soon as I heard it I grabbed it and did­n’t let go. Most of the samples I use I come across in the same way, oth­er­wise it gets lost. Once I find some­thing I like, I play around with it till I find some­thing that I think works.

As you’re a pretty avowed fan of animé and manga, what’s your favour­ite animé/manga series and do you have a favour­ite manga artist?

I’ve got to say Full­met­al Alchem­ist is up there for me, but Attack on Titan and Boku No Hero are con­tenders. I can­’t say I have a favour­ite manga artist, but Akira Tor­iyama (Dragon­ball Z) is the one I liked the most when I first got into manga.

Do you have any ambi­tions of cre­at­ing your own manga or graph­ic nov­el one day?

I do and it’s still a work in pro­gress, so I can­’t say too much, but one day I hope to bring it to life. I also hope to have my own animé pro­duc­tion stu­dio years down the line, but one step at a time.

OvaAnd­Above was a blog I that star­ted in 2015 but since then the team has grown and this year it’s pro­gressed into a col­lect­ive of artists, DJs and pro­du­cers. Apart from me, there’s Bam who’s our DJ, JD Cliffe, Doo­gie O’ Fella and Chucks who’s a pro­du­cer. We’re a strong team, we all have our own sounds as indi­vidu­als and dif­fer­ent skills that we bring to the table. Most of us are based in North West Lon­don, and the music we make is essen­tially hip-hop/rap in dif­fer­ent vari­ations from old-school vibes to dark melod­ic trap. We all gradu­ated from uni­ver­sity, but this is some­thing we’re all pas­sion­ate about and we want to pur­sue it ‘til the end.

2017 looks like it was a good year for you. You gradu­ated from uni­ver­sity and dropped your first music video, along with two oth­er songs on your Sound­cloud. What’s next for 2018 on the cre­at­ive front?

I’m plan­ning to go much harder, being at uni­ver­sity held me back cre­at­ively, but now that’s done I’m plan­ning to release more visu­als and an EP that I’ve been work­ing over this past year. I’m also cur­rently work­ing with the Marbek cloth­ing line, so I’ll be put­ting my art to dif­fer­ent uses.

Next year the team and I have plans to grow and cause a shift in the UK music scene. We want to bring people into our world in cre­at­ive ways. The world has­n’t seen any­thing like OvaAnd­Above and we’re going to change that.

Check out Kiing Arthur’s Work Below: 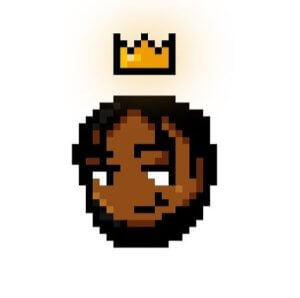