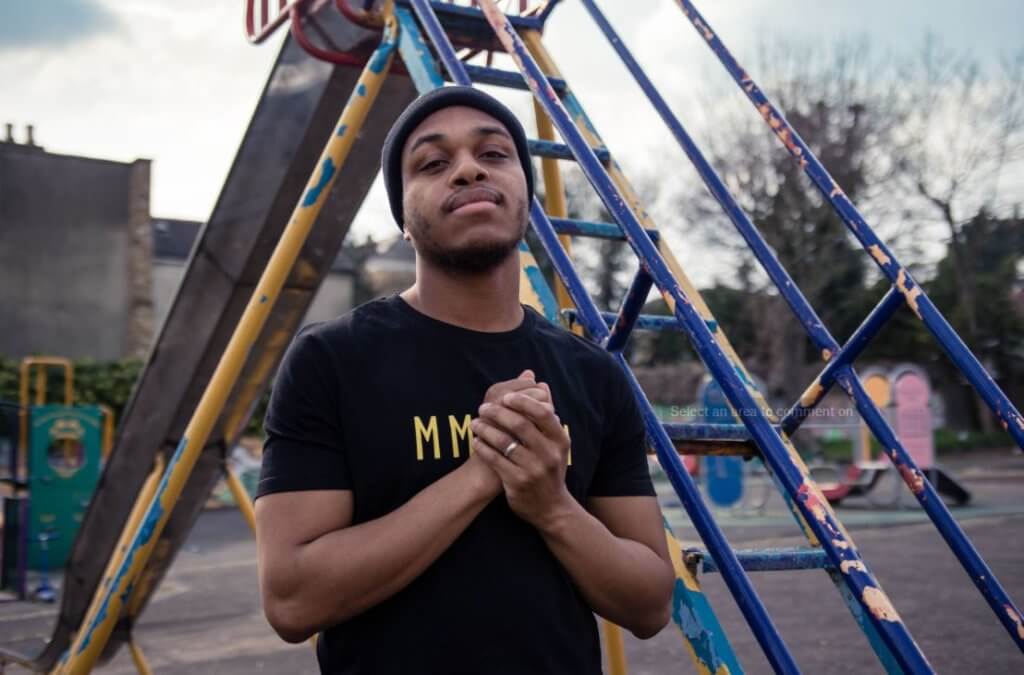 “Show­ing respect for oth­ers is really import­ant to me… If I can try and get that mes­sage across in my music for a new gen­er­a­tion, then I will,” says Croy­don rap­per Marc Jones. On his debut EP Pro­gress, Jones isn’t afraid to rap about the val­ues he lives by. Exec­ut­ively pro­duced by RP9 (Chip, AJ X Deno, Sophia Grace), on Pro­gress Jones explores his faith, love and the struggles of day-to-day life. Influ­enced by reg­gae, grime, hip-hop and funk, Jones’ six track EP has already begun to gen­er­ate a big buzz, with lead single ‘Real’ cur­rently sit­ting on over 700,000 streams on Spo­ti­fy.

We caught up with Marc Jones recently to probe his mind about his latest pro­ject and plans for the future.

Con­grat­u­la­tions on releas­ing your debut EP Pro­gress! Can you give us a little break­down of how you approached mak­ing the EP?

Thank you If I’m hon­est the EP has been in the works for nearly 2 years now. I had a few ideas and songs that I tried to self-pro­duce, but I was­n’t happy with them. Dur­ing that peri­od I met my pro­du­cer RP9 and we re-pro­duced one of the tracks I had recor­ded. That track ended up being Forever. After that we got to work cre­at­ing some songs that I’d had writ­ten for a while, as well as cre­at­ing some new ones. We prob­ably recor­ded the whole thing in around 6 weeks, minus a few tweaks.

Let’s break down some of the themes and lyr­ics on the EP. On the open­ing track ‘Give and Take’ you rap about bal­an­cing your music­al ambi­tions versus the struggles of day-to-day life. When did you start tak­ing music ser­i­ously as a career and who were your influ­ences grow­ing up?

I’ve always had a pas­sion for music. I grew up going to church and the qual­ity of musi­cians that I grew up around was extremely high. That pas­sion led to me learn­ing to play the drums, which I would con­sider my primary instru­ment. In terms of spe­cif­ic artists, my dad exposed me to a lot of music; reg­gae, funk, hip-hop, all sorts. And then my sis­ter and cous­ins intro­duced me to grime. My first real influ­ence was prob­ably Kano, but my real inspir­a­tion came from someone I went to school with — Bonkaz. See­ing him spit on the play­ground inspired me to start.

By the time I’d got to uni­ver­sity, I was done with music. But after a few years of work­ing, I real­ised I needed to do some­thing I was pas­sion­ate about to help me get through the day. We all need a pas­sion or hobby that gets us through the 9–5. Prob­ably around 18 months ago I star­ted to release and people star­ted con­nect with it. I then felt like i had a pur­pose, so star­ted to take things more ser­i­ously.

On that note, how do you bal­ance being in the early stages of estab­lish­ing a luc­rat­ive career in music versus the day-to-day struggles that need to be taken care of?

It’s hard man. I star­ted releas­ing music after I had the big fin­an­cial com­mit­ment of a mort­gage, so I have to be very care­ful with what I spend. I’m also mar­ried, so I need to make sure I’m not out every night of the week. I try to make sure that I keep things bal­anced in that sense. Stu­dio ses­sions are almost always in the even­ing after work, but it gives me some­thing to look for­ward to. I also feel like it gives me the abil­ity to talk about every­day things in a way that’s relat­able, because I’m actu­ally going through them.

On ‘Rules’ you rap about hav­ing a set of val­ues to live by. Can you talk us through some of those val­ues and how they influ­ence how you approach mak­ing music?

Show­ing respect for oth­ers is really import­ant to me. I grew up listen­ing to a lot of reg­gae music, and one of the main things in that was to respect­ful and be con­scious of those around you. If I can try and get that mes­sage across in my music for a new gen­er­a­tion, then I will.

Then there’s prac­tic­al things like sav­ing money, invest­ing time into things that are going to bene­fit you — all things that I think will help you suc­ceed in life. If people can listen to my music and be encour­aged, then I’m happy.

‘Real’, one of the tracks on the EP, has achieved more than 600,000 streams on Spo­ti­fy. Why do you think the song has res­on­ated with so many people?

I think Real is cut­ting through because it’s rel­ev­ant to nearly every­one. Our gen­er­a­tion is obsessed with social media and per­cep­tions online. I feel like it’s import­ant for us to all take a step back from time to time and think about things that actu­ally mat­ter and not worry about mak­ing our lives seem per­fect for oth­er people who are just as imper­fect as us.

Through­out the pro­ject you make a lot of ref­er­ences to your faith in God. On ‘Real’ you say, “I want to close my eyes and pray until the day is over.” How import­ant to you is get­ting your faith across in your music?

My faith is a massive part of who I am. I feel like God has giv­en me a pur­pose in life, so my music is always going to reflect that. I want to inspire oth­ers to know that life isn’t mean­ing­less. We all have some­thing we’re here to do.

I try and make my music as access­ible as pos­sible. I want those with and without faith to be able to relate to what I’m say­ing, but I make it clear where my inspir­a­tion is com­ing from and I think people respect that.

One of my favour­ite tracks is ‘Chance’. It feels quite dif­fer­ent from a lot of UK rap on the radio. On the song you rap, “everyone’s put­ting out music now, how could I come with a dif­fer­ent sound? And how can I say I don’t do it for the money when if I make a hit then I’d see more pounds.”

Do you feel a lot of pres­sure to con­form and put out more main­stream sound­ing music?

The pres­sure is always there. I want to be as cre­at­ive as pos­sible, but to get into cer­tain spaces, people make it seem like you have to have a cer­tain ‘sound’. I think when I first star­ted, I was affected by the pres­sure to con­form, but recently I feel free to make what I like. If it’s high qual­ity and relat­able, I believe there are people out there who it will res­on­ate with.

I want to make music for all occa­sions, wheth­er that’s to dis­play my lyr­ic­al abil­ity, tell a story, talk about dif­fi­cult situ­ations or have a good time. If any of those fit in with the main­stream, then great. If they don’t, then that’s fine too. We all have our lane.

What oth­er things do you have planned for the rest of the year?

I want to con­tin­ue the momentum that I’ve star­ted to gen­er­ate so I’ll be try­ing to get out there per­form­ing songs from the EP. I have a lot of new music ready, you’ll prob­ably hear from me again before the end of the year. This year has been found­a­tion­al, next year will be show­ing people that I’m here to stay.