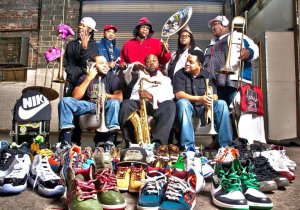 Eight piece brass ensemble THE SOUL REBELS are rid­ing high into 2017 after tour­ing four con­tin­ents includ­ing Europe, Aus­tralia, deb­ut­ing in China and Japan, selling out shows, col­lab­or­at­ing live with artists span­ning from Nas, Macklemore & Ryan Lewis, Raek­won, G‑Eazy, Joey Bada$$, Mobb Deep, Curren$y, Talib Kweli, Big Free­d­ia, Slick Rick, Melle Mel and mem­bers of A Tribe Called Quest.
The Soul Rebels star­ted with an idea — to expand upon the pop music they loved on the radio and the New Orleans brass tra­di­tion they grew up on. They took that tra­di­tion and blen­ded funk and soul with ele­ments of hip hop, jazz and rock. The band has settled on an eight-piece all-brass lineup and have built a career around an eclect­ic live show that har­nesses the power of horns and drums in a deep pock­et funk party-like atmo­sphere. When not tour­ing, The Soul Rebels’ weekly show at New Orleans’ Le Bön Temps Roulé is known to erupt with the kind of con­ta­gious, shout-along music­al may­hem that The Rebels bring with them wherever they per­form.
The Soul Rebels con­tin­ue to chart new ter­rit­ory as they com­bine topnotch musi­cian­ship and songs with grooves that cel­eb­rate dan­cing, life, funk and soul.

Ahead of their Lon­don at KOKO show on July 7th with Taleb Kweli I Am Hip Hop Magazine catch up with The Soul Rebels to find out more!

New Orleans, Louisi­ana is the birth place of Jazz music. How has being nat­ives and/or based out of the city influ­enced the band’s appre­ci­ation for Jazz and oth­er genres of music?

Being from New Orleans has greatly influ­enced our appre­ci­ation for jazz, soul, funk and oth­er forms of music because music is part of every corner of our lives. Jazz and funk is the soundtrack to everything we do.  Being raised in New Orleans, our envir­on­ment was sur­roun­ded by live instru­ments and spir­itu­al music. When we were grow­ing up in New Orleans, music was a way of life. It was on the radio, in the street, in the mar­ket and at school.  Our whole exper­i­ence with horns and drums has been a con­stant in our lives. Jazz and soul music is in the air in New Orleans, and the respect for jazz and brass music very much con­nects to and inspires oth­er forms of music, be it hip hop, rock, pop music, coun­try etc. That music cul­ture is an incred­ible bless­ing, and it shapes our entire lives and even the way we work with artists and each oth­er. We have a great respons­ib­il­ity to push the bound­ar­ies and take our New Orleans her­it­age and leg­acy to the next level.

Argu­ably, “The Beat” serves as the found­a­tion for all music­al com­pos­i­tions. Giv­en the bands exper­i­ence and abil­ity to nav­ig­ate all genres of music, does the struc­ture of “The Beat” change between genres? Are some genres more dif­fi­cult than oth­ers?

The “Beat” is very import­ant. The “Beat” comes from the heart beat. We all have a heart beat, there­fore we all can feel the beat.  The beat is the found­a­tion and meter that pro­duces the feel and shape of a song. As a drum­mer, my music­al train­ing has brought me to an array of styles and dif­fer­ent time sig­na­tures. Be it a fast or slow tempo, 4/4,3/4, cut time, 6/8… I have exper­i­enced it all. The beat can even define the “mood” and dir­ec­tion of a song. When we per­form, we dig into a beat. We digest the beat, and become one with it. The beat takes over our bod­ies and flows through our veins. This flow relates to the listen­er­’s heart, soul, and body. For example, trap music is hot today. And I always con­nect the syn­co­pa­tion and feel of trap music, bor­rowed from the leg­acy of jazz and swing. The trap beat you hear in Migos or any of the oth­er trap artists, that beat can be traced back to cym­bals, bass drum and snare drum pop­ping. The move­ment and motions of the beat very much comes from a syn­co­pated “jazz-like” motion, all very syn­co­pated.

Your musi­cian­ship and the level and skill at which the band plays boasts an undeni­able syn­ergy amongst the group. How did the band come to exist?

The Soul Rebel star­ted out as a tra­di­tion­al out­fit called Young Olympia which it was the young­er ver­sion of the Olympia Brass Band. We star­ted out doing the more tra­di­tion­al music of New Orleans basic­ally pay­ing our dues and learn­ing as much as we can from the older musi­cians a head of us. Being that most of the guys in the band are from The Hip Hop era we wanted to start incor­por­at­ing more of the music we were listen­ing to at the time. We star­ted mix­ing the sounds of the music that the dif­fer­ent musi­cians in the band like. As we star­ted doing that we real­ize that we were get­ting farther and farther away from the more tra­di­tion­al New Orleans sound so not to dis­respect it we decided that we would start our own band. We star­ted out doing shows at the fam­ous Tipit­in­a’s open­ing for the fam­ous Neville Broth­ers. Cyril Neville us and said “You guys have a very unique sound man you guys have like a Soul­ful sound but it’s like you’re rebelling against a lot of stuff that a lot of brass band are doing. You guys are like soul rebels”. We have been going down that pad ever since.

The entire band is com­posed of tra­di­tion­al musi­cians; indi­vidu­als that are skilled in the dis­cip­lines of read­ing, writ­ing, and instru­ment­a­tion. Very briefly, what are your thoughts on digit­al musi­cians par­tic­u­larly those of the Hip Hop genre?

Being that we were the first Brass Band to incor­por­ate hip hop and elec­tron­ics into New Orleans Brass Band music, we love it. We love when musi­cians are will­ing to try new things. The one thing I would want is musi­cians to start with the basics of learn­ing how to read music learn­ing how to put chords togeth­er learn chord changes. A lot of guys today are just start­ing out with laptops and soft­ware and just put­ting a bunch of loops togeth­er and call­ing them­selves musi­cians. It would open the music up to much more things if they knew where the music star­ted from and how it got to this point. I’m def­in­itely a huge fan of the music guys are put­ting out now and I’m look­ing for­ward to see what’s next.

Music has two dicho­tom­ies it is simple, yet dif­fi­cult at the same time. To mas­ter and per­form it, as opposed to listen­ing and simply just  enjoy­ing it as a fan, have two very great dis­tinct dif­fer­ences. When you learn music you have to first open the mind,to fully embrace the core of the piece as it relates to you and your instru­ment. Be it com­fort­able or uncom­fort­able at first, this is required. Then you move into embel­lish­ments of your own exper­i­ence and soul and man­ner, this what makes it, “as you say” a “New Orleans Sound” or “jazzy feel” for a band. This is why you can take a jazz stand­ard and turn it into a hip hop song, or a clas­sic­al piece and con­vert it into a soul or hip hop feel. We’ve taken a straight funk filled song and con­ver­ted it into a calypso groove, with­in a split second and then move back and forth inter­change­ably. All of this is spon­tan­eous, and free-flow­ing for us, because we have put in years of time in music as a way of life, so we see all the dif­fer­ent music­al styles as one big jour­ney. You also have to leave a space for the Supreme Being to come in and work, this provides the music with and unknown energy you nev­er say com­ing. We love the pro­cess, it moves you and it def­in­itely moves and defines me, thank you.

What is the band cur­rently work­ing on?

We have many col­lab­or­a­tions in the works and we’re tour­ing Europe with Talib Kweli, but we’re mainly focused on work­ing on a new album right now. It’s def­in­itely going to be an urb­an, con­tem­por­ary-driv­en album. It’s going be a very strong dynam­ic piece. The people we have on board are amaz­ing and iconic…the world is really going to be excited when the album comes to fruition. Expect major mc fea­tures. We can­’t reveal spe­cific­ally who might be on the album and who is pro­du­cing it. But expect new mater­i­al and an energy nev­er before heard from a brass ensemble.

Very briefly, what is the band’s per­spect­ive on the cur­rent state of Hip Hop?

Hip hop is main­stream cul­ture. Hip hop and pop are more con­nec­ted than ever, but if you dig into it you can still find gems. Hip hop is a life style, it’s a cul­ture. It’s not just a music. Artists like Joey Bada$$ whom we work with give us hope. We love Kendrick, he’s very inspir­ing and also gives us hope. Chance is incred­ible and we’ve enjoyed watch­ing him mature. Like any­thing else, there’s the good and the bad. There’s a lot of good and that’s what we try to focus on.

For more info on The Soul Rebels vis­it http://thesoulrebels.com/