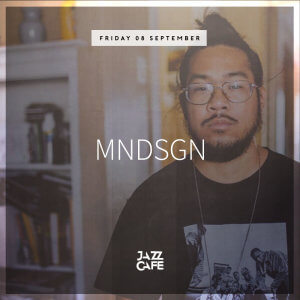 Mndsgn (pro­nounced: Mind Design) is a rel­at­ively new Hip-Hop pro­du­cer who cre­ates dreamy tracks that speak to the child with­in us. Recently he played at the Jazz Café in Cam­den to a ded­ic­ated audi­ence who smiled as he sung softly through the micro­phone. His aim seemed to be to take us back to a time that we all col­lect­ively felt… but maybe nev­er actu­ally exper­i­enced. The tracks gave off a scent of famili­ar­ity. As his lo-fi hip-hop instru­ment­als pumped slowly through the club, the dan­cers found them­selves mov­ing as if they were under­wa­ter. This was because the tracks had the tempo of a slow-jam but without the sexu­al ele­ment. Instead of love, we were more inclined to think about some old child­hood memory that we thought we had for­got­ten.

The famili­ar­ity becomes under­stand­able when you real­ise that much of the tracks use samples that you may have heard in Soul, Funk and R&B. Mndsgn might strip a 70’s funk baseline and then com­bine it with the slowed-down chords of an 80’s disco track. Because of this, my friend and I found ourselves con­tinu­ally debat­ing about the peri­od of the samples. At one moment you might be reminded of the 80’s cop show, ‘Miami Vice’, at anoth­er point you could ima­gine a young Bootsy Collins’ play­ing his gui­tar in the 70’s. Mndsgn’s innov­at­ive com­bin­a­tions illus­trated the com­mon his­tory between the genres. To go along with these samples, Mndsgn used his own key­board skills to add col­our­ful melod­ies to the mix.

After dan­cing for a while my friend said that she wanted to hear more of Mndsgn’s input. Although she liked the mixes, they were too much like what she had already heard. A few tracks later, almost in answer to her request, we heard a soft voice come over the speak­ers. It took us a moment to real­ise that it was Mndsgn him­self singing from beneath his con­ic­al hat. Although he was slightly shy in his deliv­ery, his voice was likable and sweet. His voice doesn’t blow you away with its depth but warms you with its sim­pli­city. His con­cepts are what you’d expect from someone called, ‘Mind Design’. He talks about con­fu­sion, peace and mis­un­der­stand­ings. For example, in one of his songs he says, ‘you’re dream­ing of the day you quit los­ing your mind, it might be soon­er than you think, it’s all up to you’.

Through his per­form­ance, Mndsgn cre­ated an envir­on­ment that was so com­fort­able that it made you feel like you were listen­ing to the music in a lounge. There was some­thing about him that gave off the impres­sion that we knew him some­how. I closed my eyes as he trans­por­ted us back to a time when things were sim­pler.

A writer with an interest in Philo­sophy, Soci­ology, Anthro­po­logy and all things intro­spect­ive. Someone who is equally at home in under­ground house raves as he is in café’s. He is con­tinu­ally ques­tion­ing the sys­tem and his own lines of reas­on­ing. There­fore, he is always rein­vent­ing him­self.

A writer with an interest in Philosophy, Sociology, Anthropology and all things introspective. Someone who is equally at home in underground house raves as he is in cafe's. He is continually questioning the system and his own lines of reasoning. Therefore, he is always reinventing himself.