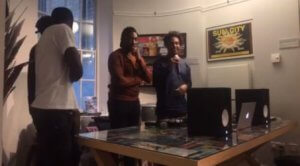 I am warmly wel­comed as soon as I enter this invite-only Hip- Hop event. The first per­son I see is Selvasse (pro­nounced: Selassie), the boy­friend of one of my good friends. We shake hands excitedly, both of us sur­prised to see each oth­er. But then I real­ise that I shouldn’t be sur­prised, I might have even expec­ted him. Selvasse is known in the under­ground Hip-Hop scene for his unques­tion­ably gentle and abstract style. In the past he’s opened for Ander­son Paak on a Boil­er Room set. After my sur­prise sub­sides, I am greeted by oth­ers who ask me what I do.
‘Do you pro­duce? Rap? Write’. This is a hard ques­tion to answer since I dabble in a few of those things.
‘I’m review­ing the event,’ I say, ‘But I also pro­duce,’ to which their eyes light up. Then I say, ‘But mostly house music’, and the excite­ment goes out of their faces as fast as it arrived. The preach­er in me struggles to remain silent. I want to give my age-old talk about how house and Hip-hop came from the same place. But this isn’t the right time, this is a Hip-Hop event and I have to respect the art.

Shem, one half of the ‘Black Male Beats’ Duo tells me more about the under­ground Hip-Hop scene in the UK at the moment. The scene is in a trans­ition­al phase in its devel­op­ment, find­ing new listen­ers in those that have over­looked our home-grown tal­ent. People are start­ing to real­ise that we have more than Grime, UK trap or the older Hip-Hop of Jeh­st or Roots Manuva. There is a wave of pro­du­cers that have been push­ing a smooth­er con­tem­por­ary style. The only hurdle seems to be in deliv­er­ing this music to the wider audi­ence and not get­ting lost in the waves of pro­du­cers on sound­cloud. But Shem is cer­tain that this par­tic­u­lar scene is grow­ing. I am inclined to agree. There is a con­scious­ness brew­ing in the UK with more people com­ing togeth­er in unity. This music might be the music­al force that it is needed.

‘Lek’s on the Beat’, a young pro­du­cer starts off the night. His beats sound very cur­rent, the cool UK trap sound that is pop­u­lar at the moment. It is the sort of thing that we are used hear­ing from ’67’. In fact, one of his beats is used by ‘Har­lem Spartans’ in their track ‘Money and Viol­ence’ which has nearly one mil­lion views on You­tube. This is a massive achieve­ment for someone who has only been pro­du­cing beats for two years.
We are returned to the boom-bap style by two pro­du­cers from the 90’s crew, ‘57th Dyn­asty’. They begin their set by play­ing rugged rid­dims which would be fit­ting on a late Wu-Tang album. The 57th Dyn­asty were major fig­ures in the UK Hip-Hop scene in the 90’s and early 2000’s. While listen­ing, I ima­gine how influ­en­tial the group must have been on an emer­ging 90’s youth cul­ture which was divert­ing from the Soul and Reg­gae of the gen­er­a­tion before them. One of the mem­bers brought his son along to the event. I thought he was only there for mor­al sup­port before he hits the decks and plays some of his own instru­ment­als and remixes. A remix of Mary Jane Girls, ‘All Night Long’ is a par­tic­u­lar stand out.

‘Shai Sev­in’ and ‘Lo-Fi’ are an inter­est­ing com­bin­a­tion. Shai, like his music, is loud and more dra­mat­ic, get­ting the crowd hyped to his hard-core rid­dims. Lo-Fi, on the oth­er hand, is more calm and soft-spoken. His beats are dreamy and reflect­ive. It makes me think of look­ing out of a win­dow on a winter Lon­don after­noon. So sooth­ing are his instru­ment­als that an MC might ruin their mood.

‘Emmavie’ is a stand-out of the night. She brings some power­ful, much-needed fem­in­ine energy into the build­ing. The sis­ter sound of Neo-Soul sud­denly flows through the room and changes the mood. Feel­ings of hope, for­give­ness, tran­scend­ence and love breathe through her tracks. Her vocals sound per­fect on the instru­ment­als and one wants to exclaim, ‘but she’s already made it!’.

The same can be said about Selvasse. There is a matur­ity to his music that can’t be denied. Maybe it has to do with how he spent his life between Ghana and Lon­don. It’s dif­fi­cult to cat­egor­ise his music. It’s more dra­mat­ic than hip-hop, more orches­trated. So many dif­fer­ent sounds are used and as soon as you get used to one sound, anoth­er one enters that’s even fresh­er than the last. 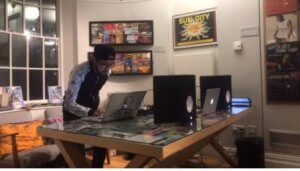 ‘Black Male Beats’ finally step to the decks and the audi­ence applauds. It is easy to see that they are loved not only for their music but for their rela­tion­ship to the com­munity. They thank the Black Cul­tur­al Archives for set­ting up the event and soon they are back to doing what they are good at. The jazz, funk and soul ele­ments are cent­ral to their par­tic­u­lar brand of Hip-Hop. They over­lay 90’s RnB or Jamaic­an vocal samples over xylo­phones and oth­er jazz instru­ments. The horns are also import­ant, con­sol­ing the listen­er at just the right time.

I step out into the smoking area for a moment to receive an inter­na­tion­al call. When I’m fin­ished, I stand there for a minute, tak­ing in the energy. Party-goers pass by on the street bey­ond the gate. They are eager to see what the night will bring. I look back to the doors of the event. People are huddled by the entrance, exchan­ging con­tact details and encour­aging each oth­er in their craft. The light from indoors looks cosy and warm. I can see Shem’s afro as he pushes out the tracks. It reminds me of a soul­ful-house DJ set.
It’s at this moment that I’m filled with hap­pi­ness by all these artists who are doing what they love. All under­ground or inde­pend­ent artists can be prone to self-doubt due to a lack of recog­ni­tion or because their craft is yet to bring in a good income. But a night like this is a pos­it­ive remind­er that the most import­ant thing is the enjoy­ment and com­fort that the craft brings. The audi­ence is so sup­port­ive and I’m sure that every­one ends up leav­ing the build­ing feel­ing even more empowered and con­fid­ent than when they entered.

A writer with an interest in Philo­sophy, Soci­ology, Anthro­po­logy and all things intro­spect­ive. Someone who is equally at home in under­ground house raves as he is in café’s. He is con­tinu­ally ques­tion­ing the sys­tem and his own lines of reas­on­ing. There­fore, he is always rein­vent­ing him­self.

A writer with an interest in Philosophy, Sociology, Anthropology and all things introspective. Someone who is equally at home in underground house raves as he is in cafe's. He is continually questioning the system and his own lines of reasoning. Therefore, he is always reinventing himself.