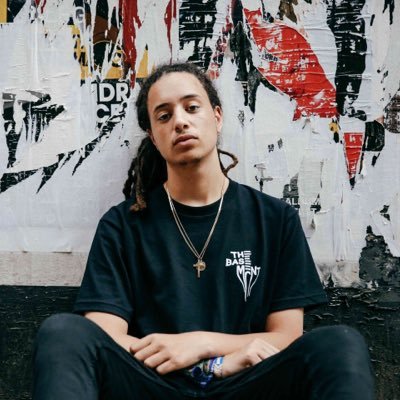 I am Hip Hop Meet Isai­ah Dreads. Boast­ing an impress­ive array of taste­m­aker plat­forms that sup­port him, the young West Coun­try rap­per has fed in to the shift­ing cul­ture of the UK under­ground scene that are now break­ing the rules and doing things their way. Isai­ah took his career in to his own hands from a very early age as he pitched him­self to the organ­isers of Gla­ston­bury on the basis he was a loc­al tal­ent. The punt and the hard work paid off as he was awar­ded a slot on the world-fam­ous fest­iv­al at the age of just 15 and now three years later, in 2016, he makes a wel­comed return to the Blues stage. We catch up with him to find out more!

You talk about your­self being a “teen with a vis­ion”, so Isai­ah what is your vis­ion?

When I say I”m a teen with a vis­ion Im talk­ing about how I know exactly what I want to do with my life and that’s music. I want build my fan­base and improve the way I write…my vis­ion is mak­ing time­less music.

Your from the coun­try and not an urb­an area such as Lon­don city, how is this reflec­ted in this music?

Com­ing from the coun­try and not a city has def­in­itely reflec­ted in the way I write. Day to day is dif­fer­ent where I live, it’s quiet and there’s not much going on..there’s a lot of things I can’t relate with when it comes to music writ­ten by someone from the city but it’s cool any­way. It gives me the chance to talk about things not many oth­ers have talked about and give more people a chance to relate.

If you could choose the Prime Min­is­ter who would you place in that pos­i­tion?

You have got lyr­ics about inspir­ing people to love them­selves for who they are, why do you think self-worth is so import­ant?

I think accept­ing who you are is import­ant because in this era social media expects so much per­fec­tion from every­one and it’s not just how people look…it’s how many likes someone gets. It’s like every­one wants to spend their life try­ing to be someone else without being who they really are. That’s why I talked about the top­ic on the second part of my Fire in the Booth, I think it’s an import­ant thing for people to real­ise.

If you could say one thing to your fans, what would it be?

Look out for everything I’ve got com­ing out over the next year. I’ve been work­ing on a load of new music, grime and hip hop and I think it’s some of my best work yet so i’m really excited for every­one to hear it.

What was your exper­i­ence in school and how has that shaped your music­al pro­gres­sion?

I nev­er really enjoyed school but I think it was just because I was so focused on music. I put so much time into writing/production after school and on week­ends that when it came to being in class I would just want to be in the stu­dio again. I think this def­in­itely helped though because I think cur­rently my writ­ing is bet­ter than it ever has been.

Sum your­self up in 3 words that best describe you?

What was it like going on “Fire in the booth” and what have you learnt from that exper­i­ence?

Doing a Fire in the Booth was sick because it’s some­thing I’ve wanted to do since I was young, I felt like I was so pre­pared to go in there and do what I needed to do because I’d wanted to do it for so long. I did it over 6 months ago now and watch­ing back it’s really good pick­ing up on things I could maybe change the next time I do a free­style. Lyr­ic wise and flow wise

I don’t know exactly where I think I’ll be in 5 years but I’d just like to have improved. I aim to do gigs out­side of Eng­land wherever that may be and have a lot of new music avail­able for people to listen to. It’ll be excit­ing to see what hap­pens over the next 5 years though.

If you weren’t a rap­per, what oth­er jobs do you think you would do well at?

If I did­n’t make music I’d prob­ably want to be a chef or some­thing. I can­’t cook at all but I like food so I think that’s a good start.

Adam KG, is con­scious Hip Hop artist hail­ing from Lon­don City whilst walk­ing the world’s pave­ments. He is inter­ested in the enter­tain­ment and media sec­tor, youth work and hol­ist­ic health.

Adam KG, is conscious Hip Hop artist hailing from London City whilst walking the world's pavements. He is interested in the entertainment and media sector, youth work and holistic health.