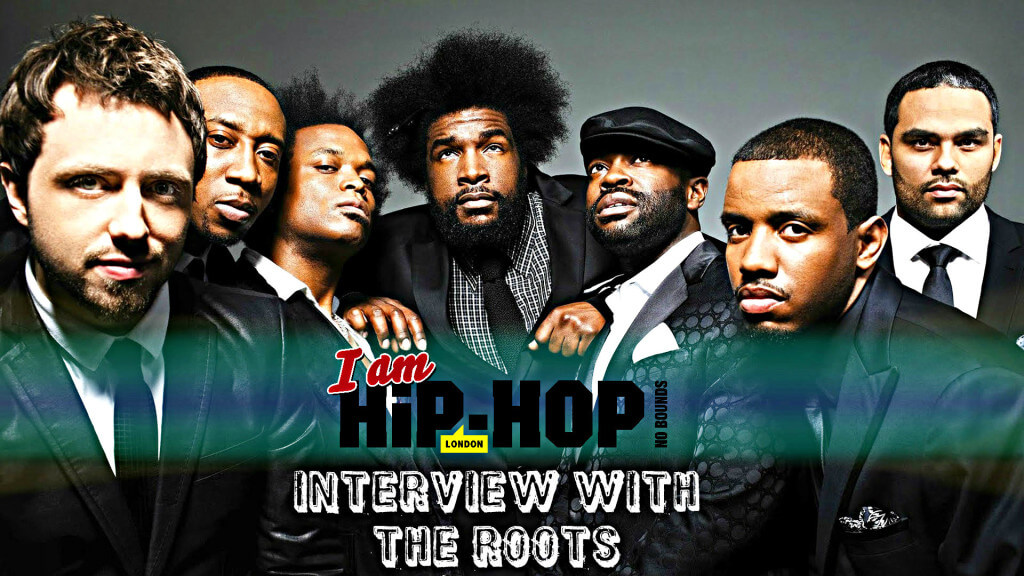 Since the start of their career, The Roots have pushed bound­ar­ies, set pre­ced­ents and reworked stand­ards. Famed for their pion­eer­ing use of live instru­ment­a­tion and socially con­scious lyr­ics, the group have enjoyed a diverse fan base from early on, their intox­ic­at­ing sound cap­tiv­at­ing people from vastly dif­fer­ent walks of life. Along the way they have col­lab­or­ated with some of the biggest names, not just in Hip-Hop, but across music as a whole.

Let’s start in the present, what’s going on for The Roots at the moment?

Yeah…well, what we have going on at the moment is our day job that we kind of do Monday to Friday……that keeps us mov­ing, so we doing that dur­ing the week and then dur­ing the week­end we’re, you know, branch­ing out, doing some sounds we do a bunch of fest­ivals every sum­mer, and then just a couple of club dates…so yeah, we doing that, and then we actually…we’re doing a couple of things…we’re doing some record­ing in con­junc­tion with a couple of plays…one is about to open up on Broadway…so yeah, we got links in the theatre that way…and also, you know, we’re work­ing on new Roots music, as always. We’re always doing, you know, like ideas, bookmarking…you know, ideas and con­cepts, things that we can refer to once we’re offi­cially in the record­ing pro­cess. So we’re work­ing on new Roots stuff, I’ve been doing out­side work, I’ve done a little bit of record­ing with Scar­face, I’ve done some record­ing with an MC named Fred­die Gibbs from LA, he and I are kind of doing some stuff more recently…yeah, you know, we’re try­ing to keep busy.

Yeah, we’re really look­ing for­ward to com­ing back over there and play­ing Brix­ton, you know, always one of our favour­ite ven­ues and Lon­don has always had a spe­cial place in our hearts, in that…in the 90s we were Brit­ish trans­plant, so we lived right out there in Kentish town. So Lon­don, def­in­itely since then, has felt like a second home, so yeah, it’s going to be a bit of a home­com­ing for us to get a chance to rock at Brix­ton

I think this is our first offi­cial Lon­don gig with this play­er Mark Kelly in the band.   The last time we played this ven­ue, our bass play­er left the band that day, the bass play­er at that point of time, he left…he quit that day, and you know, he’s been replaced by Mark Kelly, who has been great, and I this is our first time back in Lon­don in the years Mark has been play­ing with us, so…yeah, I’m look­ing for­ward to get­ting off the ground and get­ting the chance to rock as the new Roots in Lon­don, the new incarn­a­tion.

I think what’s clear with the roots is the incred­ible cros­sover that you guys have, there’s such a diverse range of people that attend your shows…

Have you always had that, from the start of your career?

Yeah, from the start of our career we’ve always had an extremely diverse audi­ence because we’ve nev­er catered to any demo­graphic spe­cific­ally, we’ve always you know, shot uni­ver­sally, and we’ve always tried to play both sides of the shape and we always tran­scen­ded gender and age and loc­a­tion and all that, and we’ve always had it, it still has grown, it’s obvi­ously on a way lar­ger scale now than, you know, it was in say 1993 or 95, but even then it was still the same sort of range in the audi­ence.

Well yeah, yeah, we’ve always prided ourselves on the fact that we’re able to be offi­cial with the live instru­ment­a­tion, and you know, not over­play, not be overly music­al, for­cing a record or for­cing a per­form­ance when it doesn’t neces­sar­ily call for that…so yeah, it’s always kind of been our thing, mas­ters of live hip hop. Over time, the stand­ard has changed and more hip-hop artists, and artists in gen­eral, are per­form­ing with a band now than did 15–20, even 5 years ago. So yeah, things just kind of came back around, full circle to what it is we do best.

You know, earli­er on, I feel like…it’s weird I keep say­ing earli­er on, but yeah, when I was young I was speak­ing from exper­i­ence, in that I was immersed in you know, all that I spoke, I was still liv­ing it. It was like I was lit­er­ally removed, very lit­er­ally removed from whatever it was that I was kind of, you know, speak­ing about in my work. But now I’m com­ing from more of a place of…you know, a story of tragedy to tri­umph, I feel like I’m a suc­cess story in that, the life that I lived at a young age, as a young­er man…it’s led me to where I am today. That in itself is a chapter that…you know, being true and dar­ing to be dif­fer­ent and focus­ing, and being grate­ful for one’s bless­ings, you know what I mean?

I wanted to talk about the situ­ation in the US at the moment, we see so much on the news about the tense situ­ations you’re cur­rently exper­i­ence, how do you feel about what’s going on?

Yeah…I have lots of feel­ings about it…you know, I feel like what’s tak­ing place in the United States right now and just with the cli­mate, you know, in the world, it’s all indic­at­ive of world his­tory and so many dif­fer­ent issues that kind of all come into play. You know, I think it’s sad that like 3 times a week there’s such out­rageous news that’s you know, prom­in­ent in the head­lines, but that being said, I don’t think any of these stories…none of this is news, none of it is new and none of it, sadly, is really sur­pris­ing, so I think it’s again sad that more of these issues are kind of cur­rently com­ing to light, you know, with the advent of social media and just how rap­idly some­thing that takes place in a remote part of the world can become vir­al and can spread to the rest of the world…I think there is some good in that it’s help­ing to get the news out there to the world and to those to who it is a sur­prise, you know, there are some people who are shocked and in awe at the fact that these things are talk­ing place in mod­ern society…I’m not one of those people but there are people in the world who are really sur­prised by it, so maybe it will be a dif­fer­ent sort of call to action, if that makes sense…yeah, I’m def­in­itely saddened to say the least by everything that’s going on

Over the course of your career, you’ve worked with so many people, out of every­body, could you pick a favour­ite?

Hmmm….i don’t know that I can. If I did have a buck­et list, I would say that most of the artists have already been checked off…there’s no one alive that I, really in my wild­est dreams, ever thought of work­ing with that I haven’t had the chance to in some shape or form, so that’s been a huge hon­our and a bless­ing and you know, some of these legends I was able to work with, you know…wow, while they were still here…like the B.B. Kings and the Bobby Womacks of the world, you know what I mean, it’s just a huge hon­our to have been con­sidered a cred­ible musi­cian and vocal­ist by people of that stature and artists of that cal­ibre, as well as by my peers, so it’s just a great thing. But there’s no one I can say has been my favour­ite.