Akala has just released his fourth album entitled The Thieves Ban­quet. Akala’s choice to recor­ded the whole album with a live band has giv­en the album a unique sound and very dif­fer­ent style from all of his pre­vi­ous albums.

Hip hop, soul, blues, jazz and rock make up this great album. So there is some­thing to offer all you fans of these four genres of music. The twelve tracks that make up this album takes the listen­er on a jour­ney from the his­tory of the Afric­an Holo­caust with the track entitled Maangam­izi to the huge and con­tinu­ing dam­age that our gov­ern­ments, cor­por­a­tions and banks play out every day with tracks like The Thieves Ban­quet and Mal­colm Said It. In addi­tion tracks such as Our Way, The Way and Anoth­er Reas­on makes the listen­er stop and take a deep look and ques­tion our way of life and how we can improve not only ourselves but each oth­er and our soci­ety. 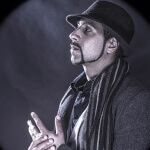