In 2009 Speech Debelle ruffled a lot of feath­ers when she won the Mer­cury Music Prize.  Crit­ics where quick to dis­miss the win, both La Roux and Florence & The Machine were also nom­in­ated that year, and in a music world where all too often tal­ent and artist­ic value is cal­cu­lated through sales and pop­ular­ity, a little-known rap­per win­ning over artists like this was a trav­esty.  Blog­gers took to the web with vigour to cast more neg­at­iv­ity over what was in fact an extremely deserving win.

I grew up lov­ing hip-hop, lov­ing rap, lov­ing word­play, lov­ing rhymes.  I also have a massive appre­ci­ation for music oth­er than hip-hop, espe­cially string and gui­tar arrange­ments.  For years I dreamt of hear­ing an artist marry the two, and for a while I thought that Jam­ie T was the closest I’d ever get to this.  Then, in Mid 2009 I bought a music magazine that came with a free CD includ­ing ‘The Key’ by Speech Debelle.

When I heard the track it felt as if the Gods had heard my cry, here I had rap, and prop­er rap with the heavy word­play and flow I craved, set to a beau­ti­ful arrange­ments with instru­ment­a­tion includ­ing double bass and cla­ri­net but still with a drum beat that smacks you in the ear to let you know it’s pure hip-hop.

After hear­ing and lov­ing this track, I got the album ‘Speech Ther­apy’ and it soon became one of my favour­ite records.  The instru­ment­a­tion and arrange­ments through­out the record are out of this world and the sub­ject mat­ter for each track is much deep­er than your aver­age rap record.  The record high­lights struggles that are relat­able and this adds so much to the exper­i­ence.

Speech fol­lowed this record with second album ‘Free­dom of Speech’ in 2009.  Slightly dif­fer­ent in sound, but a clas­sic record once again, packed full with heavy beats and exquis­ite string arrange­ments, some of which are so good they could be exerts from a Michael Kamen score.

I recently saw Speech per­form at the Booka­beat launch event and was blown away by her per­form­ance, which included some bril­liant new mater­i­al.  In my opin­ion she is the most import­ant UK rap­per of her gen­er­a­tion and so it was a huge hon­our to catch up with Speech after the show…

Q. Your third album is com­ing soon, what can we expect?

I think, you know what, it’s inter­est­ing, I think every album I’ve done son­ic­ally has been dif­fer­ent, because it’s been depend­ant on my mood, where I’m at.  My first album was a very vul­ner­able album, because of the sub­ject mat­ter, I was young, I was 19.  The second album I was…tense, you know what I mean?  I was just com­ing out of…you know the whole world was kinda tense, there was like upris­ings and everything going on in the world in 2012 and so it reflec­ted that and this album…I’ve been doing a bit of party­ing, a lot of lov­ing and a lot of get­ting more com­fort­able with myself as a woman and I think that shows in this album.  It’s probably….I don’t wanna say happy cos happy doesn’t have many tiers to it as a word, but it’s def­in­itely my most uplift­ing album.

Q. What guests have you go on the album?

Realism…Shortman’s on it…and there’s more.  It’s one of those albums where I really wanna record about 40 songs, it’s a very import­ant album for me, I think it’s the one that will cement me as an artist, you know what I mean?  I think it’ll be the album that is like…as an artists you get to a point where someone hears the first couple of seconds of your song and they know it’s you, I think that’s what this album is, it’s import­ant for me to know what I wanna hear, how I wanna sound cos straight away that’s gonna just cement me as like ‘this is what I do’  you know what I’m say­ing? So I don’t mind tak­ing as long as it takes.

Q. What’s been the best moment of your career so far?

No, I think the reas­on for me put­ting a song out is because it works as a whole song, ‘Where Do We Go?’ wasn’t on the album because it just didn’t really fit, that was more to do with it and that’s why it was a b side.  It’s noth­ing to do with what I’m say­ing, I feel like if I get to a point where I’m writ­ing, or if I’m in a situ­ation where I’m being ques­tioned about what it is I say, then I’s one I have to get away from, because it’s like someone tak­ing your oxy­gen away from you, you know what I’m say­ing?  It’s like this means noth­ing then, so I nev­er ques­tion what I say and I think I’m aware of the fact that as a rap­per I should be pro­voc­at­ive.  People think on one side, as a hip-hop artist, on one ele­ment, you’re expec­ted to speak up for a lot of people and on anoth­er ele­ment you’re expec­ted to be ignor­ant.  There’s people that think you’re ignor­ant, so there­fore just say any­thing then!  You can just get away with it from all corners I think.

Q. You’re very hon­est in a lot of you’re lyr­ics, dis­cuss­ing some deep emo­tions.  Do u ever have trouble per­form­ing such emo­tion­al expos­ing songs?

No, the only song I’ve ever had trouble per­form­ing is ‘Daddy’s Little Girl’ from my first album.  I per­formed it once in my whole career and nev­er again, because it’s an emo­tion I haven’t accep­ted.  I haven’t even excep­ted the words and what’s inter­est­ing actu­ally when I had fin­ished all the songs on the album I was talk­ing to my A&R and he said ‘oh man, I won­der what your fam­ily would think’ and it was the first time I actu­ally even thought about that, and I was like ‘fuck, I didn’t think about that’.  So, that’s the only song I just stay away from. 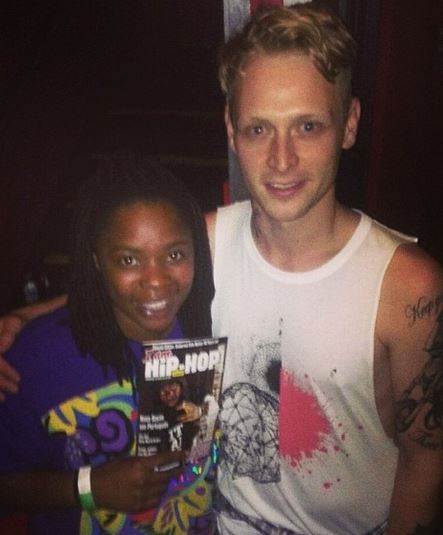