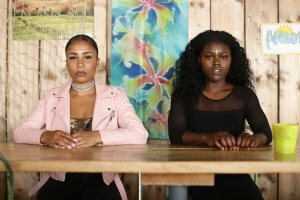 Before the uni­verse brought them togeth­er, Mvngo X Lashes indi­vidu­ally both lived and breathed music from a very young age. This East Lon­don duo met in col­lege six years ago, and it was then that their solo music dreams became a joint one. They spent all their even­ings after col­lege rehears­ing songs togeth­er. They would song-write and rehearse each pro­ject to per­fec­tion, until it was at a level that they could present it to an audi­ence. The moment they were giv­en an oppor­tun­ity to be on stage, they blew every­one away, and it was at that moment that they prom­ised each oth­er to ded­ic­ate their careers to music.

These soul­ful, hip-hop and R&B influ­enced ladies have a lot to offer the music industry with their unique, ‘old skool meets new skool’ sound, and they’re com­pletely ded­ic­ated to work smart and hard until they reach the top. They believe in music that teaches people some­thing, and music that people can vibe to, and their biggest goal is to spread these mes­sages togeth­er, all over the world. So far, the girls packed out a head­line show in 2016, as well as being recog­nised by BBC Intro­du­cing as Artists to watch.

As they gear up to play at the Round­house Rising fest­iv­al, we catch up with them to find out more!

You’ve kicked off 2018 in a huge way – you recently were fea­tured in the BBC’s Music Intro­du­cing show­case (the one at Haver­ing Col­lege). Let’s start from the top: tell us about your music and your sound!

A lot of the songs we write are very heart­felt, reflect­ing on real life situ­ations and its nor­mally situ­ations to do with myself or people around me. I find as a song­writer, nat­ur­ally I’m very obser­v­ant which sub­con­sciously comes into my writ­ing. Our sound is very R&B soul with a hint of old school because we’re inspired by the likes of Lauryn Hill, 2Pac, Big­gie etc we’re inspired by old school music and artists and music, which played a major role in my life and in my youth grow­ing up.

Haver­ing was really good and a nice exper­i­ence, all the stu­dents were super tal­en­ted and they have a lovely set up down there. Our sound is very dif­fer­ent – we’re on our own road doing our own thing, it’s vibrant, it’s heart­felt, it’s emo­tion­al and it’s real – def­in­itely real.

Last year you released two EP’s, Soulu­tion and Dis­or­i­ent­ated. What was your approach to each of these pro­jects?

People don’t know who we are, so we thought it was very import­ant to give a piece of ourselves to the audi­ence with both EP’s. We wanted them to be some­thing for people to get to know us. I have def­in­itely struggled with shar­ing my vul­ner­ab­il­ity in the past, but as time goes by I find it very import­ant to express a piece myself in the music because that’s art, and this is all about art, and that is why we have these two EP’s. There are some things that I haven’t even sat down to speak with my friends about, that is now in my music, and I think that is very inter­est­ing because that shows how per­son­al it is.

We’ve got these tracks, they’re real, they’re authen­t­ic, they’re dif­fer­ent, they’re Mvngo X Lashes, let’s get them out there, let’s intro­duce ourselves and let’s do it, let’s stop hold­ing back and let’s just get it!

Who are your main music­al influ­ences?

Lashes: I would say, Erykah badu, SWV, Flo­etry. All of these artists are people that speak the truth through their music, that’s what they all have in com­mon, and that’s what we have in com­mon with them. You can relate to what they’re speak­ing, and if you haven’t been through it, someone around you has. Most of the female artists that we’ve men­tioned are all influ­en­tial, hard work­ing strong women who when they want some­thing they go and get it. My Mum influ­enced me a lot with that also – just bob­bing along in the car with my mum, listen­ing to gar­age, rap­ping and singing along to all the tracks she used to play, know­ing all the words. Spice Girls, because whatever type of women you are out there, you could relate to at least one spice girl. I was scary spice – love scary spice haha they’re all influ­en­tial women going out there and chas­ing their dreams, so to me, they were super influ­en­tial grow­ing up. Also, influ­ences from the UK scene for me are Craig Dav­id and Miss Dynam­ite – they’re legends!

The lyr­ic­al con­tent in your songs is really pro­nounced. You sing and rap about provid­ing for your fam­ily, deal­ing with trust issues, and stay­ing pos­it­ive amongst oth­er things. Do you feel it’s import­ant to get a spe­cif­ic mes­sage out with your music?

Mvngo: It’s def­in­itely import­ant to get your mes­sage out there, I think the most import­ant thing for me is to tell your truth and be as authen­t­ic as pos­sible. Music is spir­itu­al and some­times there are things you’re going through and you might not want to talk about it but the beauty is there is someone else going through that and if you can speak up about it through music and someone else has been through some­thing sim­il­ar, you auto­mat­ic­ally relate and you think “oh my gosh, someone felt that, I felt it too”. It’s some­thing that can bring us closer togeth­er. As human beings, we all think we’re vastly dif­fer­ent from each oth­er or we think some­thing we’re exper­i­en­cing, nobody else has exper­i­enced but I find that the more people speak up about things, and situ­ations that have happened to them, there are more people out there that have been through sim­il­ar situ­ations, and it just shows us how sim­il­ar we are and brings us closer togeth­er. It’s a close­ness in human­ity I wish to achieve with our music.

Lashes: Def­in­itely get­ting your mes­sage out there, but most import­antly, tell the truth.

Mvngo X Lashes are very inter­est­ing names! Is there a mean­ing behind them?

Mvngo: Funny story! My iden­tity that I had for music a few years ago was just stu­pid, the name that I had was Coco Darls, and when I was ques­tioned about the name, I didn’t know how to explain why the name meant any­thing to me or why it described me. It didn’t really have a mean­ing for me – Coco because I’m dark skinned, and darlin’ because, well, just because lol any­way, so one day I was walk­ing home and I was think­ing about a new name that would actu­ally mean some­thing to me. So I asked myself, if I had to be a fruit and fruits rep­res­en­ted per­son­al­it­ies, what fruit would I be? And Mango came straight to my head, so I’m going to be called mango (but replace the a with a v because I don’t want people to mis­take me for the cloth­ing brand lol). I remem­ber think­ing “Mvngo is a nuts name”, but it works. And at the time, I used to eat man­gos so much, and I was like “how have I nev­er thought to call myself that before?”. I’ve got a per­son­al attach­ment to Mango’s. When I see one or eat one, I’m like “yeah, that’s my G”. lol.

Lashes: Haha it’s so funny we always get asked this ques­tion! People are so intrigued to know where these names came from – it’s deffo our most asked ques­tion. I am Lashes because I used to do eye­lashes for my friends, and I con­stantly always wear them – I am a lashes queen. I love Lashes. 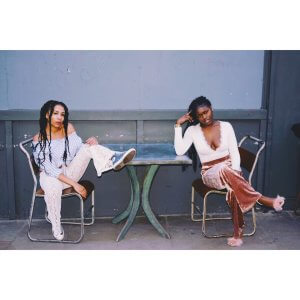 You both have impress­ive act­ing and drama resumes. Mvngo, you’ve appeared in East­Enders and Hollyoaks, and Lashes you’ve writ­ten and dir­ec­ted a You­Tube series. Are you involved in any oth­er cre­at­ive endeavors at the moment?

Mvngo: Yes I’ve deffo had a jour­ney. Apart from that, I’m doing music full time now, song­writ­ing, and I’ve star­ted to actu­ally release some solo pro­jects, so watch out for that!

Lashes: Act­ing, drama, love it with a pas­sion, I always have and always will. That’s where it all began for me, drama was some­thing that I clicked with when I was very young, I loved it and still do. I am prom­ising, that you’re going to see us act­ing with our music real soon, because we’re going to have videos for you soon – and we’re going to be act­ing in those videos.

You’ve been work­ing with each oth­er since col­lege days. What’s the cre­at­ive pro­cess like between you? Does one per­son lead on the song­writ­ing or is it dual approach?

Mvngo: The pro­cess is nor­mally me come up with a concept, or I’m already in a cre­at­ive mood, so I would have writ­ten a song and present it to Lash, and then we find a beat or a pro­du­cer and we jump on it. Or some­times I come up with a concept, and I write the chor­us and my verse and then lashes writes her own verse. But yeah, most of the time as far as cre­at­ive dir­ec­tion on a song, I’m nor­mally in charge of that.

Tell us a bit about what we can expect from your per­form­ance at the Round­house Rising fest­iv­al?

Mvngo: We’re such free spir­its. A lot of energy, emo­tion – it’d going to be a roller­coast­er. That’s it in a nut­shell.

Lashes: All I can really say for this one is, work is work, play is play, we don’t mix the two. We’re not play­ing, put it that way!

Mvngo: This year we have some singles com­ing out this year that we’re really, really excited about. Very grown and mature sounds. As we’re get­ting older, I think we’re form­ing into a nice shape music­ally, and we’re excited for you guys to hear the new stuff.

Inter­view: Who is Salome MC?