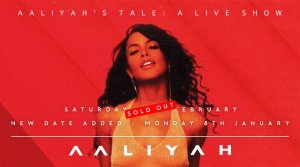 Aaliyah Dana Haught­on released three stu­dio albums in her life, with the third, self titled Aaliyah, released shortly before her death in a plane crash in August 2001. It deb­uted at num­ber two in the Bill­board 200, selling 187,000. The album has cemen­ted Aaliyah’s place as one of the greatest tal­ents in the his­tory of R&B, and her tra­gic­ally cur­tailed life and career remains one of the biggest ‘what-ifs’ in pop music his­tory. In the wake of her death, the album earned cult status and rose to num­ber one in charts.

The album has since become legendary, and we can’t wait to host a ten-piece orches­tra play­ing the record back-to-front. Expect to hear a unique orches­tral arrange­ment of all of the clas­sics, from “We Need a Res­ol­u­tion” and “More than a Woman” to “Rock the Boat” and many more in between.