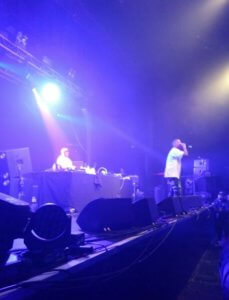 On arrival in Eclect­ic Brix­ton a great mix of people at 12pm we caught the end of Reneg­ade Brass band it was decent but the MC not so under­stand­able. Then there was some groovy beats played by the DJ Apollo Brown which got the crowd groov­ing, to then be fol­lowed by Plan­et Asia; the pre­vi­ous time I heard of him was on a Swedish hip hop record Up Hygh- Speak yo Piece which was hard to under­stand and did­n’t really fit the chilled out vibe atmo­sphere of the night.

Mov­ing on to MC super­nat­ur­al was a great fea­ture in between where he was free-styl­ing whatever items the crowd was giv­ing him, it really uplif­ted the crowd before the main act! Krafty Kuts opened with the sample of the Jimi Hendrix song “kiss the sky” with Chali 2na boss­ing the mic on the first track:  “Do this for you”, “Com­ing thru” from Chali 2na album “Fish outta water” which was released in 2009, it was the 4th song and one of his most fam­ous hits out­side of play­ing in Jur­as­sic 5.  Next up was “Wel­come to Ter­ror­dome” fol­lowed a few tracks later by “Hands high” a song that was made by Krafty and 2na which was a crowd-pleas­er.

It felt like there was­n’t enough pres­ence on stage there was some­thing missing(Akil, Marc7, Soup maybe.) The per­form­ance then moved on to the Dynam­ic duo Dynam­ite MC with Chali 2na a great pres­ence and power­ful sound and it’s a shame they did­n’t play more than 2 songs because they were killing it!! “It ain’t my fault” was the best of the two off the new album “All 4 Corners” anoth­er banger. After a couple of songs it was they over­played it a bit with too many old school beats, so it lost it’s momentum and was too stop start for me.

There was a sick drum and bass song they played before the end of the set which I had nev­er heard by Chali 2na — which was a pleas­ant sur­prise.  But all in all the gig lacked some­thing, so I am not sure wheth­er I would go again. Maybe I was spoilt for choice after watch­ing J5 with Cut Chem­ist and DJ Nu Mark play­ing hit after hit, I really felt that there need to be more MCs on stage. Non­ethe­less Chali 2na is still one of my favour­ite MCs, like my friend put it he has flow like a addi­tion­al music­al instru­ment, and that is what made the night.

Latest posts by Amos (see all)