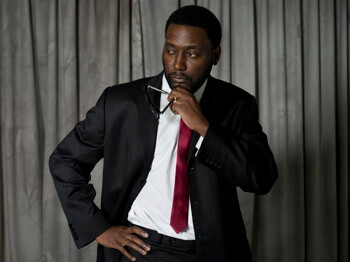 BIG. DADDY. KANE. Prob­ably the most hip hop name ever. If you don’t know this fig­ure, here are some facts to meas­ure the weight of this non­stand­ard MC :

Rolling Stone magazine ranked his song Ain’t No Half-Step­pin’ #25 on its list of The 50 Greatest Hip-Hop Songs of All Time.

He intro­duced the notion of lyr­ics in the Hip Hop, coupled with an innov­at­ive rhyme tech­nique and an unri­valled flow for his time. For instance, he dir­ectly influ­enced Eminem on his own rhyme tech­nique. No less!

In short the Hip Hop has nev­er been the same after Big Daddy Kane. He changed everything.

After 30 years of career (more than I lived), B.D.K is still per­form­ing on stage like no one else for his Big Daddy Kane Tour.

On this occa­sion, with the key play­er, we had the oppor­tun­ity to review what defines him: the tour, his motiv­a­tion, his pro­jects, his vis­ion… Inter­view with a legend.

You have almost 30 years of career, which is just crazy at some point. How do you find the motiv­a­tion to keep rap­ping and per­form­ing all around the world ?

Oh man you know I just love Hip Hop. It’s just a pas­sion. It’s not that hard to get motiv­ated.

Can you please describe us what is The Big Daddy Kane Tour ?

Yes, we know you as a great enter­tain­er.

Yeah, you can expect a real show with a lot of the­at­rics, cho­reo­graph­ies, cos­tumes… it will be a great event.

The 10th of May, you will per­form at the Jazz Café in Lon­don. Have you already been there ?

Yes, I have been there sev­er­al times. I love the atmo­sphere there, the ground, the pub­lic… everything is here to get the best per­form­ance. I really enjoy the Brit­ish pub­lic, they always come for­ward. I have many shows planned in the UK and it’s always a pleas­ure to per­form there.

To talk about your career now, your last stu­dio album “Back to the Future” was with your crew Las Sup­per in 2013. How did the group form ?

I can’t really tell you how it did, it’s just my band, you know.

Will your crew be there in Lon­don ?

I don’t know yet. We have to see which dates fit with the diary of every­one. But yes, see­ing them on stage is a pos­sib­il­ity, it would be great.

Can we expect new pro­jects from you or your group in the future ?

Not for the moment hon­estly. We are all involved in dif­fer­ent pro­jects for the moment, you know… but yeah it would be inter­est­ing. Maybe in the future, who knows ?

What’s your vis­ion about the cur­rent rap game and its evol­u­tion ?

Tough ques­tion… I would say it’s totally dif­fer­ent now. The beats, the flows, the top­ics… it’s not the same trip. People don’t rap the same way no more. You have dif­fer­ent trends now. I don’t really have an opin­ion about all this.

Well, you have rap­pers like Kendrick Lamar, J Cole, Logic… who are cur­rently con­sidered as the best rap­pers. Even though the times are dif­fer­ent with all these new trends, the lyr­ics are still very import­ant in the rap game. It’s what defines hip hop.

What kind of music are you listen­ing to now ?

Mmh well, not that much of hip hop. I am listen­ing mainly to soul music with artists like Leon Bridges. This kind of music has a real influ­ence on me.

You also have an act­or career. For instance we saw you in “Escaped” with Keanu Reeves last year. Do you have new pro­jects from this side ?

Not in short time, but I am cur­rently work­ing as an exec­ut­ive pro­du­cer on a biop­ic of my career and the Juice Crew (with Mar­ley Marl, MC Shan, Kool G Rap, Masta Ace amongst oth­ers). The dates have to be con­firmed but many hip hop guests are involved, it’s excit­ing !

Some­thing to say to our read­ers ?

I am really look­ing for­ward to see­ing you guys. I hope you will all come around. It will be a great show, don’t miss out !

Big Daddy Kane will be play­ing at the below dates, for tick­ets click here.

Com­ing from Par­is and inter­ested in French & US Hip Hop top­ics. I’m writ­ting about any rel­ev­ant sub­jects for I am Hip Hop magazine. You only know MC Sol­aar ? My mis­sion is to show you many more.

Coming from Paris and interested in French & US Hip Hop topics. I'm writting about any relevant subjects for I am Hip Hop magazine. You only know MC Solaar ? My mission is to show you many more.