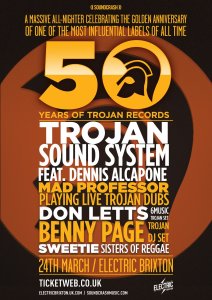 Massive all nighter celebrating the Golden Anniversary of one of the most influential labels of all time.

Their pres­ence in the music industry is tan­gible, and their artists have gone down in music his­tory.

Formed in 2004, Lon­don based Tro­jan Sound Sys­tem are an insti­tu­tion in Sound Sys­tem cul­ture and have toured the globe to spread their mes­sage of love and unity through the power of ska, rock­steady, roots reg­gae, dub, dance­hall and UK bass music.

Den­nis Alca­pone, one of the ori­gin­al DJs, is a true vet­er­an of reg­gae and dance­hall. With a career span­ning dec­ades, his appear­ance list reads like a who’s who of reg­gae, and with Alca­pone man­ning the tables, expect the dance floor to come alive under the addict­ive sounds of skank­ing gui­tars, driv­ing bass, and singable tunes.

Mad Pro­fess­or has col­lab­or­ated with a dizzy­ing amount of not­able artists, includ­ing reg­gae artists such as Lee “Scratch” Perry, Sly and Rob­bie, Pato Ban­ton, and Jah Shaka — and that’s only nam­ing a few. His skills are unmatched and his sets are always on point.

BBC6 Music’s very own Don Letts was known in the late 70’s as the DJ that single handedly turned a whole gen­er­a­tion of punks onto reg­gae. Guar­an­teed to bang out the best of the best in both old and new tunes from the genre, it’s impossible to keep still dur­ing one of his sets.