She was the com­plete triple threat who cap­tured our hearts.

She could sing, dance, and act.

She was our baby girl.

She was more than a woman.

She was one in a mil­lion.

She was that some­body.

It has been exactly 20 years since a tra­gic plane crash in the Bahamas, where she was film­ing the video for her song “Rock the Boat”, claimed the life of a true pop prin­cess.

Aaliyah was at a point in her life where she had it all.

Her third album, the self-entitled Aaliyah garnered high reviews for its bold state­ment of a young woman who had come into her own and had offi­cially made the trans­ition from teen sen­sa­tion to adult star a suc­cess.

The tracks “Try Again” “We Need a Res­ol­u­tion” “More Than a Woman” and “Rock the Boat” spoke to her grow­ing mature sound.

She made it clear that she wasn’t to be pigeon­holed into a box where often­times female artists find them­selves stuck in a state of per­petu­al child­hood and adoles­cence and be for­bid­den from grow­ing up.

In an era where pop stars such as Brit­ney Spears and Christina Aguilera had their bod­ies and songs routinely policed by those wanted to box them into youth, Aaliyah let it be known that she can grow with grace and edge

She was also rid­ing high on the suc­cess of her 2000 film debut Romeo Must Die co-star­ring with Jet Li and the late DMX and had fin­ished shoot­ing her then latest movie Queen of the Damned and had secured a deal to star in the second and third Mat­rix movies.

Aaliyah also had a blos­som­ing love life as she was in a rela­tion­ship with record exec­ut­ive Damon Dash. She was on top of the world and under the most tra­gic of cir­cum­stances it was all taken away at the age of 22.

It is hard to fathom that Aaliyah has been gone for 20 years and this dev­ast­at­ing anniversary has reminded the world of who she was and what she rep­res­en­ted.

Born in Brook­lyn, New York and grow­ing up in Detroit, Aaliyah grew up sur­roun­ded by music. Her moth­er Diane was an opera sing­er who stepped away from the busi­ness to care full time for Aaliyah and her son Rashad. She also had an uncle in Barry Hanker­son, an enter­tain­ment law­yer who even­tu­ally mar­ried Gladys Knight.

As a child, Aaliyah would sing all the time and her voice and cap­tiv­at­ing pres­ence wowed every­one she came into con­tact with and all knew that she was destined for big things in the future. In ele­ment­ary school, she would per­form in plays and sing every chance she got.

Her first major break came when she made an appear­ance on Ed McMahon’s Star Search in 1989 at ten years old.

Her song for choice was “My Funny Valentine” a fam­ily staple grow­ing up. Although she didn’t win, it was one of little to no set­backs she would encounter.

She came into the pub­lic eye at age 15 with the release of her 1994 debut album Age Aint Noth­in but a Num­ber dis­trib­uted by her uncle’s record com­pany Black­ground Records. The album was pro­duced by R. Kelly and thank­fully Aaliyah got out from under his thumb as quickly as pos­sible.

She then moved onto to Missy Elli­ott and Tim­ba­l­and who were the chief engin­eers behind her later suc­cess­ful releases One in A Mil­lion in 1996 and Aaliyah in 2001. The three became a triple threat of innov­a­tion and cre­ativ­ity and their fresh, dynam­ic, and ver­sat­ile sounds struck a chord with audi­ences that con­tin­ues to this day.

She went on to cul­tiv­ate an image all her own that made you pay atten­tion to the music and let the music speak for her more than any­thing. In a time, spe­cific­ally in hip hop, where women were often com­part­ment­al­ized into select cat­egor­ies, Aaliyah was able to blend all those vari­ous ele­ments togeth­er. She was Missy, Lil Kim, and Lauryn Hill all wrapped in one and didn’t have to choose one paradigm over anoth­er pav­ing the way for future female hip hop/R&B artists such as Ciara, Megan Thee Stal­lion, and Rihanna to do the same.

It was also dur­ing this time peri­od, 1996–2001, that she began to har­ness her tal­ents on the sil­ver screen in the films lis­ted above and was on the cusp of movie super­star­dom.

In her short life, Aaliyah became one of the most influ­en­tial artists of all time and her mix of street but sweet lyr­ics and imagery made her an icon. 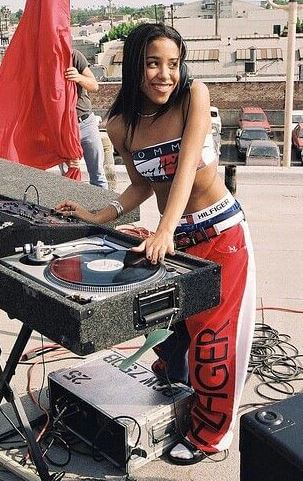 To get a broad­er sense of Aaliyah’s leg­acy, I had the hon­or of speak­ing with music journ­al­ist Kathy Ian­doli, who has writ­ten for some of the most pres­ti­gi­ous hip hop pub­lic­a­tions such as Vibe, XXL, and The Source.

She is also the author of the new book Baby Girl: Bet­ter Known as Aaliyah.

Can you believe that it has been 20 years since Aaliyah passed away?

No I really can’t. I think the com­bin­a­tion of, con­sid­er­ing the fact that she has become such a fix­ture still in music, it is hard to remem­ber that peri­od of time where you felt like she wasn’t here at all. The idea of it being 20 years is bizarre because it feels like it was yes­ter­day but also feels like it was forever ago.

What was it about Aaliyah that made her standout as an artist?

Aaliyah was one of those audi­ences where when you looked at her you heard her music. When you heard her music you had a very spe­cif­ic pic­ture of her in mind. She was just an all-around pack­age and she just embody every aspect of her artistry from her look and her sound. Very rarely you encounter a real trend­set­ter, an artist that legit­im­ately cre­ates the trends that every­one fol­lows. See­ing that in an artist like Aaliyah, you don’t usu­ally see the effects until 20 years later and you still see her and hear her in all these artists. Just watch­ing that unfold with these new gen­er­a­tion of artists it is amaz­ing to watch.

Giv­en the tra­ject­ory she was on with “Rock the Boat”, “More Than a Woman”, “We Need a Res­ol­u­tion”, she was enter­ing that stage in her career where she was com­ing into her own as an artist. In today’s music­al land­scape, if she were still around, where would she fit?

She would fit right in because when you think of the artists that are pop­u­lar right now they have taken pages from the Aaliyah play­book. She influ­enced them all. There would be no ques­tion about where she would fit because she was the one who birthed so many artists. I am curi­ous to see who have adop­ted those things if Aaliyah was still act­ively doing them and who have adop­ted those sounds if Aaliyah was act­ively doing them.

That makes a lot of sense not just with her music but with her act­ing as well. She was really com­ing into her own as a legit­im­ate act­ress, obvi­ously with Romeo Must Die put her on the map and then she did Queen of the Damned. She was about to do The Mat­rix series and I won­der if she was around to the rest of those movies, would that have made that series a whole lot bet­ter than they actu­ally were?

The Mat­rix would have been a huge thing for her. I think that would have really changed everything.

What made you want to write this book about Aaliyah?

I had writ­ten about Aaliyah for 20 years in the music industry in journ­al­ism. There is part that would have writ­ten and spoken with her if she was still here. I real­ize that more and more after writ­ing the Lil Kim book, giv­en how close they were, there is my part of me in my heart that says that I would have done this book with her. All hopes and wishes aside, com­ing off God Save the Queens, I wanted to cre­ate anoth­er book hon­or­ing a female legend who changed everything. The way that women in hip hop changed music, I wanted to cre­ate a book hon­or­ing the con­tri­bu­tions of a female artist who set the tone for an entire gen­er­a­tion and that is what Aaliyah did. That was really my whole reas­on for doing this.

Over the course of your, did you ever have con­ver­sa­tions with Aaliyah?

Actu­ally no. I always felt that we were a con­stant missed con­nec­tion. I would show up to an event and every­body knew that I was an Aaliyah fan. There were times where I would show up and was told “you just missed baby girl” and so I would show up to places and either she would have just left or had seen her in a dis­tance. I had my own fan girl moment at the 1998 Bud­weiser Super Fest where I lit­er­ally jumped on the seat­ing at Giant Sta­di­um to try to be front row for Aaliyah and this was a year before I entered into the music industry. I remem­ber I inter­viewed Quincy Jones a few years after she passed away and we were hav­ing a con­ver­sa­tion and he paused and said “weren’t you one of Aaliyah’s friends?” and I said “No. I wish.”

He said that “you would have been some­body that Aaliyah would have hung out with.” I remem­ber him fin­ish­ing that and I was like “I am going to hold onto this forever if you don’t mind Mr. Jones.”

How you would sum up the leg­acy of Aaliyah?

I think that Aaliyah’s leg­acy is one that con­tin­ues to unfold. It is made up of some many parts. Cer­tain parts have las­ted 20 years and oth­ers will last 20 years more after that. When you have this mul­ti­di­men­sion­al artist who packed so much into sev­en years, the leg­acy is time­less­ness and how that will con­tin­ue echo with every new artist she inspires because there will always be a piece of Aaliyah in each gen­er­a­tion and every­one who adopts cer­tain aspects of her. She will keep going.

Then, now, and forever, the memory of Aaliyah will nev­er van­ish and music fans every­where will always keep a spe­cial place for her in our hearts.