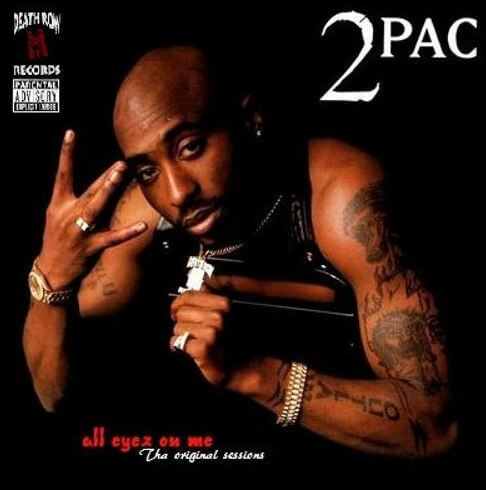 It was the pro­ject that marked the begin­ning of the end while also becom­ing the quin­tentisi­al epic driv­en album in Hip Hop his­tory. It has been exactly 25 years since Tupac Shak­ur released the sem­in­al All Eyez on Me album that would become his final stu­dio pro­ject before his untimely death in Septem­ber 1996 at the age of 25.

The album encap­su­lated everything that was going on in Hip Hop and Tupac’s state of mind. It was the first major release that marked the offi­cial ring of the bell of the already bur­geon­ing East Coast-West Coast feud.

It is import­ant to set the album in its prop­er con­text.

It all began in Novem­ber 1994 when Tupac was shot five times at the Quad Stu­di­os in New York City and sub­sequently sus­pec­ted his one friend Big­gie Smalls, Sean “P Diddy” Combs, and East Coast based label Bad Boy Records of being involved.

From there, artists and fans star­ted to choose their sides and the main­stream media was more than happy to exploit the situ­ation to fur­ther crim­in­al­ize hip hop cul­ture that was already pre­val­ent at the time.

At the same token, some with­in the game took it a step fur­ther, namely Suge Knight, founder of the West Coast based label Death Row Records who infam­ously called out Diddy at the 1995 Source Awards by say­ing “any artist that want to be an artist and want to stay a star and won’t have to worry about the exec­ut­ive pro­du­cer try­ing to be all in the videos, all on the records, dan­cing come to Death Row!”

Mean­while, Tupac was sit­ting in jail at the Clin­ton Cor­rec­tion­al Facil­ity in New York after being con­victed of sexu­al assault, a real­ity that he needed to own up to but failed to do so.

While he acknow­ledged that he should have done more when it came to his entour­age’ beha­vi­or toward the young woman, Tupac him­self didn’t take respons­ib­il­ity for his actions.

This goes to the heart of how we need to have a pub­lic reck­on­ing in the #MeT­oo era when it comes to pub­lic fig­ures com­mit­ting sexu­al viol­ence and Tupac, for all the good that he did when it came to racial justice as well as some examples of fem­in­ist sym­path­ies and sens­ib­il­it­ies, is no excep­tion.

After Suge Knight bailed him out and signed him to Death Row, Tupac imme­di­ately got to work and his legendary work eth­ic shine through in every cut on All Eyez on Me.

Engin­eers and pro­du­cers on the album would talk about how he would write two bars in less than five minutes as well as how he would work long hours in the stu­dio mix­ing the records while they all dozed off.

The laid back and slow groove track “Live and Die in LA” was Tupac’s trib­ute to social and cul­tur­al makeup of Los Angeles as well as a shar­ing of his own inter­per­son­al affec­tions for Cali­for­nia.

The call for battle echoes out of “Ambi­tionz As A Ridah” was held bent on con­front­ing his 1994 shoot­ing.

His walk down memory lane reflect­ing on the bond he shared with a close friend made “I Ain’t Mad At Cha” a fan favor­ite.

The ten­der­ness in his hon­or­ing of those who fell vic­tims to the streets make you shed so many tears as you listen to “Life Goes On”.

Finally, the most vicious diss record ever laid to a track in “Hit Em Up” is Tupac’s offi­cial declar­a­tion of war against Big­gie and the East Coast and a clear sig­nal that at least on his part that there was no going back and any attempt at recon­cili­ation was unreal­ist­ic.

With All Eyez On Me Tupac solid­i­fied his place as a legend in every sense of the word, for good and bad.

The rose that grew from con­crete blos­somed into the thug angel who was con­stantly stuck in that state of ten­sion between those iden­tit­ies and used that to fuel his drive into becom­ing the voice of his gen­er­a­tion and that is why the response 25 years later will nev­er waiver.

The Revolu­tion Will Not Be Tele­vised — Chavez: Inside the Coup

Doc­u­ment­ary: Inside The Revolu­tion: A Jour­ney Into The Heart Of Venezuela