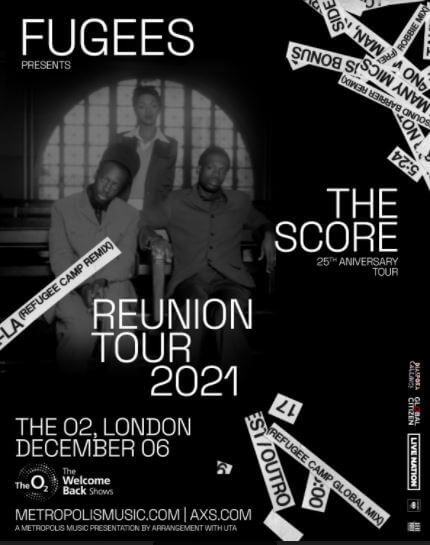 HIP-HOP ICONS WILL REUNITE TO CEL­EB­RATE THE 25TH ANNIVERSARY OF THEIR GROUND­BREAK­ING, CLAS­SIC ALBUM

Ms. Lauryn Hill, Wyclef Jean and Pras Michel of legendary hip-hop group Fugees have reunited to announce their first world tour in 25 years and first shows in 15 years to cel­eb­rate the anniversary of 1996’s The Score, one of the greatest albums of all time. Presen­ted by Dia­spora Call­ing and pro­duced by Live Nation the 12 city inter­na­tion­al tour will stop at Lon­don’s icon The O2 Arena this Decem­ber, before con­tinu­ing onto the final shows in Niger­ia and Ghana.

The Fugees have a com­plex but impact­ful his­tory. I wasn’t even aware the 25th anniversary had arrived until someone brought it to my atten­tion. I decided to hon­or this sig­ni­fic­ant pro­ject, its anniversary, and the fans who appre­ci­ated the music by cre­at­ing a peace­ful plat­form where we could unite,  per­form the music we loved, and set an example of recon­cili­ation for the world. — Lauryn Hill

The Score is one of the best-selling and most sig­ni­fic­ant music albums of all time.  Upon its release, it peaked at num­ber one on the Bill­board 200 charts and earned the group two Grammy Awards. Fugees were the first hip-hop group ever to be nom­in­ated for Album Of The Year, and the nom­in­a­tion also marked the second only rap album to be nom­in­ated for the top accol­ade as well at the time. With singles includ­ing “Killing Me Softly,” “Ready or Not,” and “Fu-Gee-La,” the highly acclaimed body of work has con­tin­ued to inspire and stay in con­stant cir­cu­la­tion with artists and fans alike. The sev­en-time plat­in­um album has sold over 22 mil­lion cop­ies world­wide and remains the best-selling album ever by a hip-hop group. As of 2021, the album is the fifth most-streamed rap album released in the 1990s on Spo­ti­fy. The album is fea­tured prom­in­ently on lists includ­ing Rolling Stones’ “The 500 Greatest Albums of All-Time,” The Source’s “100 Best Rap Albums,” Spin’s “Top 90 Albums of the 90s,” Vibe’s “100 Essen­tial Albums of the 20th Cen­tury,” and more. There is no doubt the influ­ence of the album con­tin­ues to ripple through­out music and cul­ture.

As I cel­eb­rate 25 years with the Fugees, my first memory was that we vowed, from the gate, we would not just do music we would be a move­ment. We would be a voice for the un-heard, and in these chal­len­ging times, I am grate­ful once again, that God has brought us togeth­er. — Wyclef