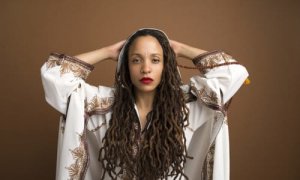 Sa-Roc is the anti-thes­is to some of the lame-ass hip hop I’m hear­ing these days. She comes with fire and she comes with pas­sion, and doesn’t look any­thing like the car­bon cop­ies that roll through the charts on their fact­ory line con­vey­er belts. If you’re not so famil­i­ar with the main­stream music industry please under­stand that from my exper­i­ence, it’s not the most pleas­ant space. If you can ima­gine the artist as being a wounded gazelle in the middle of the Ser­en­geti, then every pred­at­or, vul­ture and scav­enger that feasts of its flesh would be the sur­round­ing people who all want a piece without any thought to the tal­ent of the indi­vidu­al. Our gen­er­al music industry is broken for the want of money, fame and tem­por­ary val­id­a­tion which fre­quently comes in the form of sex.

On the oth­er hand, Rhymesay­ers Enter­tain­ment is a US Indie label which sup­ports inde­pend­ent artists such as MF Doom, Broth­er Ali, and Evid­ence. Hav­ing signed the Wash­ing­ton DC nat­ive Sa-Roc in 2016, Rhymesay­ers have accu­mu­lated an impress­ive roster and has helped enable Sa-Roc to per­form along­side HipHop heavy­weights such as Talib Kweli, Dead Prez, and The Roots. But make no mis­take, her label may be open­ing doors but it is her pres­ence, tal­ent and unwaver­ing lyr­ic­al flow that is see­ing her pro­pel her­self into the inter­na­tion­al mar­ket.

Sa-Roc came on stage at the Jazz Café in Cam­den on a cloudy Fri­day. The ven­ue is warm for sound and a good size for an intim­ate show. It has hos­ted artists such as Yasi­in Bey (Mos Def) and Seun Kuti, not to men­tion Ben E. King and Amy Wine­house. The Jazz Café is known for its hip-hop, neo-soul, reg­gae, and blues per­form­ances, while also provid­ing a space for new and estab­lished jazz artists. As Sa-Roc came on, she came with the inten­tion to clear the stage for her pres­ence. It’s the first time I’ve seen a per­former do this and it made me won­der about what per­formers must leave on stage after a show; their love, their laughter, their heart­break and their pain.

One of the first things about Sa-Roc that struck me is her enun­ci­ation and her power. She doesn’t mumble her way through words nor does she try to eat the micro­phone while she raps which means we can actu­ally hear what she’s spit­ting. Black Lives Mat­ter… and so do lyr­ics. Emcees; please stop cup­ping the grill of the micro­phone and press­ing it to your lips, we can’t hear your shit when you do that. A good hip hop song without decent lyr­ics is like eat­ing pasta without any sauce or season­ing; you can do it for a bit but it gets bor­ing real quick. Her music­al abil­ity is bey­ond most emcees of today. And I don’t say that lightly. She’s one of the first hip hop artists I’ve heard in a long time who has the abil­ity to com­bine lyr­ics and flow seam­lessly. Her words weave back and forth into inter­lock­ing joints that cre­ate a pic­ture and feel­ing at the same time. I would put her up against almost any emcee; male or female, and be con­fid­ent that her battle style and quite fierce­ness would see her com­ing out on top. Espe­cially with what her latest music is show­ing us she’s cap­able of.

“They’d rather see the death of me before they sup­port an emcee with lyr­ic­al integ­rity” Sa-Roc rhymes in “The Reck­on­ing” about the lack of recog­ni­tion for emcees like her. She per­formed this song beau­ti­fully while get­ting the audi­ence to chant “If rap was a game, I’d be MVP”. The audi­ence was so respons­ive to her; people was dan­cing and sway­ing to her beats. Time seemed to lose shape and four-minute songs seemed to evap­or­ate into seconds. The next song was “Fire Squad”; an inter­est­ing J.Cole re-shift. This par­tic­u­lar song isn’t my favour­ite but I like the auda­city she has in it. The lyr­ics are still fire and she doesn’t tip-toe around or try to stay meek, she claims who she is and in true old skool rap style, she claims the title of the best.

“Meta­morph­eus” has slowly become one of my Sa-Roc favour­ites. I’m not even gonna try to make up some deep reas­on as to why. I just like it, espe­cially the hook and lyr­ics. It has a rhythm to it that feels slow but it’s really not a slow song; the bass just puts me in a bit of a trance. Some­thing inside me likes this song and my brain hasn’t yet fully caught up with the reas­ons why. Both “Meta­morph­eus” and “Lord of the Forest”  demon­strate Sa-Roc’s abil­ity as a rap­per and a sing­er. She does both excep­tion­ally well.

For reas­ons I’m still unclear on, we then had a vis­it from the sounds of Queen. The set took a break for a drop in of a piece of “Bohemi­an Rhaps­ody”. It’s a good song and every­one seemed to enjoy the slightly schizo­phren­ic change of pace; myself included.

We then went into a song called “I Am Her” and the song fol­low­ing that was entitled “God­dess Gang”. Now without get­ting too preachy about this I’m gonna go ahead and say there’s a reas­on songs like this are needed right now. There’s a reas­on Sa-Roc’s crowd was filled with sis­ters who are HipHop heads. And there’s a reas­on why broth­ers are start­ing to seek align­ment with the mes­sage. We’re all fos­ter­ing a broad­er under­stand­ing of what feeds and heals us as indi­vidu­als, and then also with­in the realms of gender, race, class etc. It is at this point that I feel we’re able to heal each oth­er and cre­ate under­stand­ing. I want to empower my sis­ter not hurt her. I want to give her love and bless­ings not take her love-of-self or her man. I want to learn from her and help her build, not tear her down and humi­li­ate her. This is the era we’re mov­ing in to.

“True Mas­tery” was one of the last few songs Sa-Roc and Sol Mes­si­ah per­formed. And the title man­ages to encap­su­late her grow­ing abil­ity. I don’t want to go as far as to say that she’s at the peak but she’s cer­tainly mak­ing her way up there with a steady and con­fid­ent pace. “I came from a jungle made of con­crete and con­flict, liars and them tigers and them bears held us host­age where I learned the dif­fer­ence tween authen­t­ic and imposters.” Sa-Roc is relat­able. Maybe not for every­one but for some of us, she’s telling our story with the aggres­sion that only comes from grow­ing up in a hos­tile envir­on­ment.

The final song of the night was “Forever”. For a lot of us this was the first song we heard from Sa-Roc and is without a doubt my favour­ite song. The beat, the pace, the lyr­ics, the bass line, the flow, and the num­ber of times she switches flow. It’s a mas­ter­piece of a song and it was the per­fect song to end her set on. “Forever” is the song that is the per­fect intro­duc­tion of Sa-Roc to the world. So if there’s only one song of hers that you wanna hear, it ought to be this one.

Ten years into a blos­som­ing career and Sa-Roc is gradu­ally secur­ing her legendary status. When I hear her music, I don’t feel the weight that comes with main­stream music. She sounds both light and aggress­ive, both play­ful and yet extremely ser­i­ous. The music is com­posed beau­ti­fully. Her lyr­ics are truth and power craf­ted mas­ter­fully, and her flow is insane. I want to hear her on a track with Kendrick or SZA. I want to hear her on a track with Tech N9ne or Immor­tal Tech­nique. She’s like the season­ing that has the abil­ity to enhance a meal. The way saf­fron changes the entire taste and col­our of a dish, Sa-Roc is chan­ging the fla­vours of my playl­ists.

Aisha is a Writer and Research­er based in Lon­don. She Thanks you for read­ing.

Latest posts by Aisha (see all)

Aisha is a Writer and Researcher based in London. She Thanks you for reading.