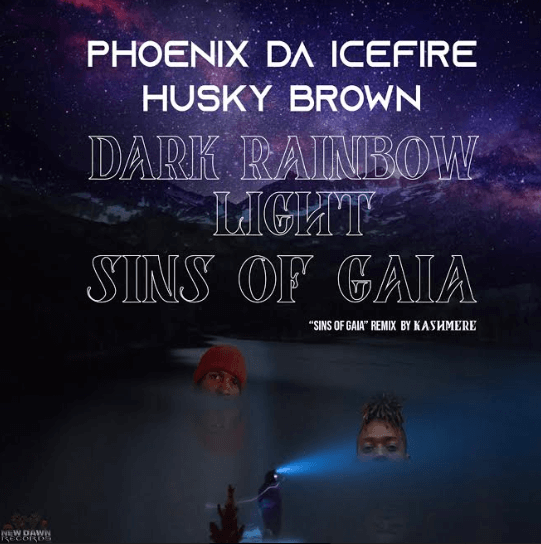 Phoenix Da Ice Fire is an artist I have fol­lowed for a num­ber of years now. Thanks to buy­ing a chance CD in the bustle of Cam­den High Street, I was both blown away and hooked at the same time. Since then I have heard most of his releases and have yet to be dis­ap­poin­ted, even more so when I had the priv­ilege of spend­ing time with him and his fam­ily when he wel­comed me into his home for an inter­view.  I had pieced togeth­er in my mind a man of dis­par­ate roles, from those music­al ones in Black Chron­icle, Triple Dark­ness, as a solo artist, and as a writer of graph­ic nov­els, a ded­ic­ated fam­ily man and a pro­vider. Rather than all these roles rep­res­ent­ing a chamele­on, a frag­men­ted puzzle, he proved him­self as a human man with nat­ur­al facets whose pieces fit togeth­er as a per­fect whole.

His latest release, with pro­du­cer Husky Brown, Dark Rain­bow Light, along with anoth­er track, Sins of Gaia, just fur­thers his pro­gres­sion, pas­sion, and prom­ise. The imme­di­acy of being drawn in by the track is noth­ing short of amaz­ing. Dark Rain­bow Light uses the lyr­i­cism of con­trasts and dif­fer­ences in order to pro­mote unity, hence the cor­rel­a­tion with the Lauryn Hill quote above. The lyr­ics have a depth that requires repeated listens, each time the listen­er picks up some­thing new in the words and the mean­ings.

The start imme­di­ately dives into unex­pec­ted con­trasts: “Whatever you do alone, it gives height. Whatever you do togeth­er, it gives depth.” Straight away you become part of the song, tak­ing on the role of being our own inter­pret­er.

Des­pite the dif­fer­ent situ­ations he tackles, such as crime, viol­ence, men­tal health, poverty, either up or down, rich or poor, we share one plan­et. “We’re all here as one, share one breathe. The truth we can’t accept”. It’s only the mix­tures of extreme Dark and Light that bring out a beau­ti­ful rain­bow. There are no highs pos­sible without the lows.

Phoenix is an artist with drive, belief, and com­mit­ment. “I’ve got con­vic­tion, not the sort they give in court”. Hip Hop is not a thing Phoenix phys­ic­ally does, it’s a way of life. The lyr­ics over a soundtrack from pro­du­cer Husky Brown with hip hop beats, soul, and drum and bass gives a spe­cial song, from the raw­ness of real­ity to the beauty of a rain­bow.

Sins of Gaia, the second song on the double release is a slower more stripped down affair. Low-fi beats with some elec­tron­ica back a track that tackles the day to day struggle liv­ing in areas gov­erned by depriva­tion.

While the focus is on the inner cit­ies and pock­ets of poverty, these are used as a micro­cosm for a wider pic­ture on a giant scale. The trans­la­tion of ‘Gaia’ is ‘World’ and this is how the song starts. “It’s a crazy world’ and “it’s a mad world’ are repeated numer­ously. Phoenix speaks of danger on the streets, people dying in their teens, being judged at first sight often due to the col­our of your skin, prob­lem based on your genes.  Mul­tiply these prob­lems from just one area and we see that these issues mani­fest them­selves on a glob­al level.

The lyr­ics flow amaz­ingly, they feel innate, organ­ic, almost spon­tan­eous. They come from a spe­cial inner world: “I’ve seen many things you see in your dreams”. Dreams too, are import­ant. This notion res­on­ates with a quote from Wale, “Life without dream­ing is a life without mean­ing”. Finally one lyr­ic from the track says it all: “Love, peace, and har­mony, that’s a beau­ti­ful recipe”. And that, suc­cinctly, is what we need for the Gaia.