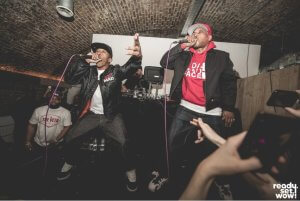 When talk­ing of the key names in 90’s, hard­core ‘Gang­sta’ rap, many name rap­pers from the west coast such as Ice Cube and when we think of boom bap from this era, we think of the New York lyr­i­cists such as Nas.

There was how­ever a group that man­aged to blend the dark lyr­i­cism of the west and the hard hit­ting beats of the east with a pinch of raw anger to cre­ate a sound that has been unmatched ever since.  That group was Onyx — a bunch of Queens nat­ives who broke through in 1993 with their acclaimed, main­stream debut album, Bacdafucup.

The duo of Sticky Fin­gaz and Fre­dro Starr returned to this side of the pond to per­form at Arch­space, Hag­ger­ston, East Lon­don for one night only on Sunday, 6th May.

The night was sup­por­ted by Cana­dian rap­per, Snak the Rip­per who could have passed the night as his own gig since most of the crowd knew his tracks and got a celebrity wel­come after he fin­ished his set. 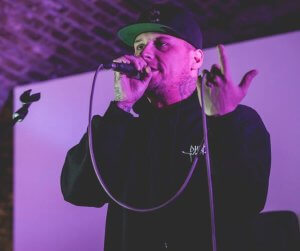 As Snak made his way through the crowd to meet with the guests, the grimy vocals of Onyx drew all the atten­tion to the stage as the duo deman­ded “When I go buc buc, you bet­ter buc back”. Which are vocals from their more recent 2014 track, Buc Bac.

Des­pite being one of their new­er tracks, the energy had not been lost at all as the crowd went crazy as they star­ted to form a mosh pit right away. The pumped up force con­tin­ued into the night as the group sig­nalled for an inter­mis­sion. This inter­val how­ever was not a typ­ic­al one as the rave didn’t stop but rather diver­ted to a trib­ute set of hip hop artists that had passed away since the group broke through. The Notori­ous B.I.G, Big L, Big Pun and Prodigy were a few of the names that were hon­oured while the crowd held their lights up.

DMX, who has been in the news recently for being sent back to jail also got a shout out. This cued for the night to be really and truly ‘shut down’ as the pair per­formed their X fea­tured hit, Shut ‘Em Down. The mosh was now in full effect as Fre­dro climbed a speak­er to get full view of the packed out crowd. 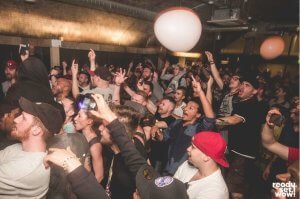 The late Jam Mas­ter Jay got an hon­our next as Onyx per­formed Throw Ya Gunz, which was pro­duced by the former Run DMC DJ. JMJ had also helped the group break through after he received a demo from them in 1991. Jay also gave fel­low Queens artist, 50 Cent his New York break through some years later before passing away.

The night then drew to a close with the crowd still on fire while Onyx per­formed their biggest hit of all time, Slam. Des­pite wear­ing their trade­marked hood­ies and jack­ets on one of the hot­test days of the year so far, Onyx not once failed to lower the tem­per­at­ure as the energy on the stage and in the crowd was heated all night. 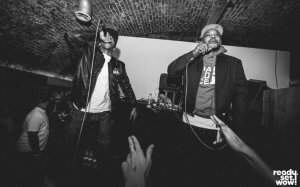 Keep up to date with Hip Hop Back In The Day for hip hop pro­mo­tions, gigs and mer­chand­ise by click­ing here.

Check out our inter­view with Onyx here.