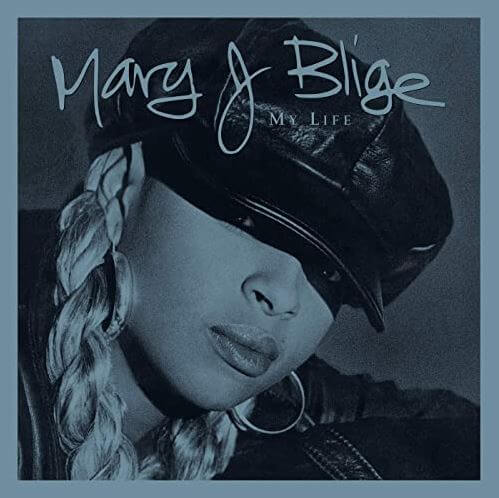 The queen of hip hop soul opened up recently about the leg­acy of argu­ably the most illus­tri­ous pro­ject of her illus­tri­ous career. A career that is filled with top ten hits, mil­lions of records sold, nine Grammys, and an Oscar nom­in­a­tion while giv­ing voice to so many who been through the worst life has to offer. The recent Hulu doc­u­ment­ary My Life sheds light on what lead to the cre­ation of the album of the same title that made Mary J. Blige immor­tal.

It was her sopho­more fol­low up to What’s the 411?, which put her on the map after she signed with the late Andre Har­rell and Uptown Records. Each track on My Life opened up a win­dow into Mary’s deep pain and anguish and it was also an homage to the R&B/Soul sounds that she grew up with in a music lov­ing fam­ily liv­ing in the Schlobo­hm Hous­ing Pro­jects in Yonkers, New York.

Paired with her mentor/producer Sean “Puffy” Combs and pro­du­cer Chucky Thompson, Mary was able to chan­nel her inner most struggles into lyr­ics that struck a chord.

The title track “My Life” which samples Roy Ayers, “Every­body Loves the Sun­shine” spoke to her need to be under­stood in the con­text of her des­pair. Her cov­er of Ross Royce’s “I’m Going Down” said it all about her need for uncon­di­tion­al love.

“Be Happy” attrib­uted to her desire to find the hap­pi­ness that she was denied.

In the midst of her ground­break­ing work, the doc­u­ment­ary revealed that it was dur­ing this time that she was bat­tling with clin­ic­al depres­sion, drugs/alcohol, and was in an abus­ive rela­tion­ship with K‑Ci Hailey of Jodeci, who were also signed to Uptown.

“She talked about how the pen was her voice.”

It was with My Life that Mary cemen­ted her status as the Bil­lie Hol­i­day, Bessie Smith, Aretha Frank­lin, and Tina Turn­er of her time, a con­sequen­tial black feminist/womanist per­former who didn’t relent or held back from speak­ing truth to power. It also inspired and chal­lenged oth­er artists to dig a little deep­er for their second album and if you look at the mid to late 90’s in the world of R&B you will see TLC’s Crazy­Sexy­Cool, Brandy’s Nev­er Say Nev­er, and Monica’s Angel of Mine fol­low­ing that tem­plate.

After talk­ing with Craig and learn­ing about his exper­i­ences inter­view­ing Mary, he had some of his own cri­tiques of the doc­u­ment­ary.

“We didn’t get the his­tory of Uptown and why Uptown star­ted fus­ing black youth cul­ture and you didn’t get any sense of how ground­break­ing it was at the time.”

With that said, he shared with me that My Life was going back to the roots of what black music has always rep­res­en­ted and how that leg­acy was applic­able to black life in the early and mid-1990’s.

“Black art was to remind us of our human­ity and Mary is in a long line of artists that do that” he said.

“This is the music of a gen­er­a­tion lost to crack cocaine and mass incar­cer­a­tion.”

If you want to see that impact that Mary’s music has on Black Amer­ica watch the doc­u­ment­ary and then look up a clip pos­ted on Twit­ter not too long ago of a vigil for Breonna Taylor in which the crowd blasts and sings along to “Everything” of the Share My World album which happened be Breonna’s favor­ite song. In the end, Mary J. Blige shared her world and the world recip­roc­ated with love, admin­is­tra­tion, and affec­tion for her and all that she con­tin­ues to rep­res­ent.

Her music did more than just made us dance and bop our heads, it made us open our hearts and it also saved lives.

The queen has spoken.