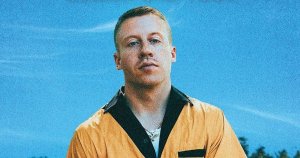 That part of a live music gig in the minutes just before the artist comes on stage, are usu­ally the most tense. All my pre­con­cep­tions dis­sip­ate and I really don’t know what to expect. If it’s an artist I know and love, there’s always that chance that they won’t hit the flow that aligns with the energy. In oth­er words, some­thing will just feel off. If it’s an artist I’m not so famil­i­ar with or enthu­si­ast­ic about, there’s a big chance they’ll assign them­selves in my men­tal filling cab­in­et under the label “time wasted”.

Macklemore sits in a strange cros­sov­er of famili­ar­ity for me. There are a few songs that I know and thor­oughly appre­ci­ate; “Can’t Hold Us” became an anthem for me. “Neon Cathed­ral” swells up an addict’s mel­an­choly with­in me which few songs seem to match. “White Priv­ilege II” was a rarely spoken nar­rat­ive that I still appre­ci­ate for its nudging abil­ity to remind me that protest without self-aware­ness can be wound­ingly inef­fect­ive. I see his inten­tion and I feel his authen­ti­city so he’s on my radar, but I wouldn’t go as far as to say that I’m a fan. Either way, I needed to see his live show because I just knew it would be an enter­tain­ing show.

I tend to watch the house lights. You know something’s about to shift some ser­i­ous energy when those house lights dim down and the crowd starts cheer­ing both in and at total dark­ness. In those moments, no mat­ter how loud the crowd becomes, everything inside me becomes silent. I can hear echoes in my head. I can feel the blood cours­ing through my veins. In the moments before an artist takes the stage, I feel a com­bin­a­tion of warmth and secur­ity. I don’t know if any­one else will get that, or if every­one gets it. But I do know that when the music starts… I feel love.

There’s one feel­ing I love more than almost any oth­er feel­ing. There is noth­ing that com­pares to the sound and vibe of the Bass that thumps you in the chest. When a song starts and the sub­woof­er hap­pens to be in just the right spot, the Bass drops and the vibra­tions rattle through my rib-cage and ripple through both the soles of my feet and the soul of my exist­ence. For me, this is one of the reas­ons I love live music. One of the reas­ons I love hip hop. One of the reas­ons I love and have pas­sion for good sound engin­eer­ing. The Bass and rhythm are the found­a­tions for a good song; vocal­ists can be massively over-rated but the Bass just sits patiently and lov­ingly provid­ing the struc­ture for the love and spir­it of great music. This show reminded me of all this. It all came rush­ing back in that very first bass thump. It may have been my favour­ite part of the night.

“Ain’t Gonna Die Tonight” was the open­ing song. It man­aged to cap­ture a sense of what this show was going to be; a mix of intens­ity and play. As soon as Macklemore appeared, the crowd went wild and almost deaf­en­ingly so. I can’t remem­ber the last time I saw so many white people that happy… like ser­i­ously, I really can’t. The song came with sup­port vocals from Eric Nally; a mod­ern day Fred­die Mer­cury who works the crowd into the sing-a-long moments. Along with “Firebreath­er”, com­plete with pyros which are always nice to see, and held the same flow and set the same tone for the rest of the even­ing.

After an ode to his daugh­ter, next came “Marmalade”. I heard someone describe this song as “plinky-plonky” and I think it’s the per­fect descrip­tion for a song that isn’t really my kinda thing. Macklemore’s break out song in 2012 man­aged to become an award win­ning sleep­er hit; hit­ting num­ber 1’s in mul­tiple coun­tries and accru­ing over 1.1 bil­lion views on You­Tube. “Thrift Shop” may well be the reas­on Macklemore stands before us and it’s smart to keep a song like that at the top of the set list. It’s an enter­tain­ing and catchy song com­plete with back-up dan­cers, but there isn’t really much more to the live per­form­ance of it oth­er than the hype it’s still rid­ing on. The essence of the song is a clev­er anti­thes­is to the chains and whips flashy-rap that exists; it’s just a shame the song couldn’t erad­ic­ate that trend entirely.

After an emo­tion­al “Same Love” per­form­ance intro­duced by Macklemore’s pro­clam­a­tion to equal­ity, the crowd was now warmed up for the bulk of the “Gem­ini” solo album. Com­plete with cos­tume changes, audi­ence mem­ber-dance offs and guest vocal­ist Jess Glynn, this chunk was the play part and was some­what hit and miss for me, but thank­fully the misses weren’t enough to throw off the entire show. I liked see­ing that Macklemore was clearly happy on stage doing his thing; some­times it’s just nice to see someone’s infec­tious smile and res­on­ant joy. How­ever, with all due respect to his jour­ney and his self-reflect­ive style; I can’t help think­ing that his earli­er, more polit­ic­al work might’ve been the type of show that spoke to me and provided some­thing more mem­or­able.

Macklemore asked people to put their phones away for a minute and enjoy the next song like we were liv­ing in the 90’s. Being a bit of a tech­no­phobe myself, I appre­ci­ated the sen­ti­ment. Some people didn’t respect it but the vast major­ity stopped watch­ing the world through a screen for a minute and enjoyed “Can’t Hold Us” in all its anthem­ic glory. He closed with the lead single from his solo pro­ject entitled “Glor­i­ous”.

This song actu­ally is some­what glor­i­ous and I’m not entirely sure why; it just feels like the type of song I wanna hear on a beau­ti­ful day when the sun’s shin­ing, and I’m run­ning to remind myself that I can. The sweetest part of the night might have been see­ing the smile and the grat­it­ude on Macklemore’s face; because even if this impress­ive show had ended up being a shitty show, see­ing a person’s vis­ible joy and grat­it­ude is a highly redeem­ing qual­ity.

Aisha is a Writer and Research­er based in Lon­don. She Thanks you for read­ing.

Latest posts by Aisha (see all)

Aisha is a Writer and Researcher based in London. She Thanks you for reading.