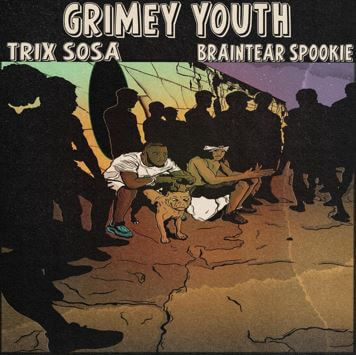 New banger from Trix Sosa has struck a bal­ance between his roots in Lon­don rap and sum­mery Afrobeat fla­vours. Clearly inspired by ele­ments of Hip-Hop and Jamaic­an pop, there are hints of the likes of Kojo Funds, Wiz Kid, NSG and Tion Wayne.

Fresh into the music industry, Trix made his mark on the Lon­don rap scene with his first single in 2018. His sense of pride for his East Lon­don back­ground in ‘Grimey Yout’ and rose-tin­ted lament for his child­hood has show­cased his pas­sion for song­writ­ing as well as per­form­ing. With clubs being closed, this banger is bound to improve on any socially dis­tanced BBQ this sum­mer.

Trix released his first single, ‘Play With Me’ in 2018- an upbeat track that is remin­is­cent of Jamaica with a steel drum style synth in the back­ground. His later singles, includ­ing, ‘Clown­in’, ‘Open Mic’, ‘Many Have Come’, ‘Mad About Bars’, ‘Billing It’ and his most recent album, ‘From Cus­tom House With Love’, col­lect­ively com­bine play­ful, Hip-Hop and Afrobeat inspired rhythms with his thought­fully writ­ten bars.

Between these releases, Trix has col­lab­or­ated with an array of artists also on the UK Grime, Hip-Hop and Rap scene, includ­ing Kojo Funds, Abra Cadabra, Don EE, Jus D, LK and Kano. It is clear from these impress­ive col­lab­or­a­tions that Trix not only has a pas­sion for UK genres, but also those inspired by West Africa and the Carib­bean.

Hav­ing made a name for him­self in his loc­al area of East Lon­don with his eclect­ic mix of inspir­a­tions and skil­ful lyr­i­cism, Trix is bound to make his mark more widely with ‘Grimey Yout’ in the com­ing months.