John Jigg$ links up with SkyCash Beats to release an exclus­ive single titled “Nights Like This”.  The single is tak­ing the world by storm with over 2k views in only a few hours!  The record is a tale about a young Jigg$ who dreams of see­ing his name in big lights to where he is now, “You’ll know my name J I two G’s, you see”.   He puts one foot in front of the oth­er push­ing his A1 game with every step and every move.  Jigg$ is no longer dream­ing of “Nights Like This”.  His name is burn­ing bulbs across the U.S. and over­seas. 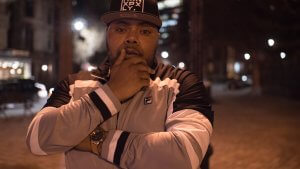 Long Island’s own John Jigg$ has become a house­hold name in the Hip Hop scene and the music industry as a whole! A few years back some might have claimed, “John who”? Now in 2018 he car­ries stam­in­ate suc­cess on his back with an extens­ive music cata­log, head­lines with major legends such as Mr Cheeks, DJ Red Alert, Dinco D, Funk Mas­ter Flex, Spe­cial Ed, Slick Rick, DMX, and that is just to name a hand­ful. He is also fea­tured on PMD’s latest album, and is well respec­ted in both the indie and main­stream world of Hip Hop. It is no longer “John who”? Pres­ti­gi­ous radio, media, and press around the globe refer to Jigg$ as an epic entity one step away from reign­ing as one of Hip Hop’s greatest!

Jigg$ recently returned back to the states from his per­son­al European Tour. Upon his return, leav­ing no room to adjust to time, he raced back into the stu­dio to release sev­er­al new singles while work­ing round the clock pol­ish­ing up his forth­com­ing album.