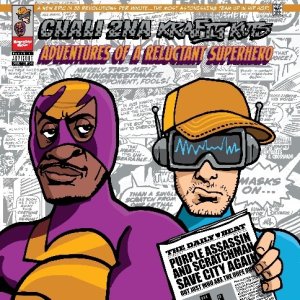 After hero­ic­ally launch­ing the first single ‘Guard The Fort’ at the BBC 6 Music Fest­iv­al in March, the time has come for hip-hop’s favour­ite super­her­oes to unleash their highly anti­cip­ated album. The industry’s most recog­nis­able voice, Chali 2na, and turntable wiz­ard Krafty Kuts have been not-so-secretly pre­par­ing this pro­ject since 2017 through over 150 live shows and count­less stu­dio ses­sions. The time has finally come to grab your capes, don a pair of tights and load up the turntable ready for the show to begin. This is ‘Adven­tures Of A Reluct­ant Super Hero’ – pre­pare for the Purple Assas­sin and the Scratch­man as they come and save your city, the scene and hip-hop as we know it.

Set for release on the 9th August, with second single ‘Dis­tance’ sched­uled for 28th June and third single ‘Waste No Time’ com­ing out on the 12th July, the dynam­ic duo have been teas­ing a full LP since 2017’s ‘Hands High.’ Fea­tur­ing a who’s‑who of col­labs and guest appear­ances from hip-hop roy­alty, this 15-track record takes you to just about every corner of the genre, leav­ing no stone unturned.

With Lyr­ics Born and Gift Of Gab join­ing on ‘Guard The Fort’ to deliv­er a ser­i­ous state­ment of intent to open the LP, the rest of the record is an adven­ture through funk, breaks, rolling bass­lines, buck­ets of groove and everything in-between. Throw in a gen­er­ous por­tion of expertly delivered bars and vocals from genre sidekicks like Harry Shotta, Skye (Morcheeba), Omar, Dynam­ite MC and more, and you’re left with a hip-hop record that not even the com­ic books could have con­ceived.

Between them, Chali 2na and Krafty Kuts have worked with the best of the best – from Jur­as­sic 5 to The Prodigy and even per­form­ing along­side The Rolling Stones, so it’s no secret that their col­lab­or­a­tions are recog­nised at the highest levels of the industry and this album is no excep­tion.

The two vigil­antes will also be fly­ing from town to town fully equipped with vinyl crates and a mic over the sum­mer. The cru­sade will be tak­ing hip-hop back to its roots over the next few months, with plenty more dates to be announced – so stay tuned!

Catch the duo on tour