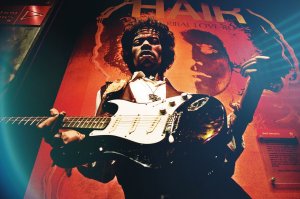 A lot of pro­du­cers and musi­cians agree that if Hendrix had lived longer, he would’ve even­tu­ally got­ten into rap and hip hop. BBC Radio 6 spoke to former Hendrix pro­du­cer Eddie Kramer, who said, “This whole idea of street music would have def­in­itely influ­enced him… The next step? Who knows… He may have even got­ten into rap.”

Con­sid­er­ing the level of exper­i­ment­a­tion that Hendrix brought to the table, this the­ory actu­ally makes a lot of sense. Although Hendrix is not exactly known as a pion­eer of elec­tron­ic music, it was his exper­i­ments on gui­tar that paved the way for his con­tem­por­ar­ies and future musi­cians to under­stand and apply the har­mon­ic poten­tials of noise, feed­back, and elec­tron­ic­ally pro­duced music in gen­er­al.

In fact, if you listen to a lot of mod­ern hip hop and/or RnB, you’ve prob­ably already heard how much Hendrix’s music­al dir­ec­tion goes well with these soul­ful genres. His 1967 hit song Fire was sampled in 2009 by Lupe Fiasco in a song of the same name. Purple Haze, which is argu­ably his most fam­ous hit, was used by Meth­od Man and Red­man to pro­duce the song How High in 1995.

Even Frank Ocean, who’s con­sidered to be one of the most influ­en­tial RnB artists today, bor­rowed from the Jimi Hendrix Experience’s Little Miss Lov­er. He used parts of the song to pro­duce Crack Rock, a track on his debut stu­dio album, Chan­nel Orange. Who Sampled reveals many oth­er mod­ern hip hop artists who also used Hendrix’s work in their songs, includ­ing Joey Bada$$, A Tribe Called Quest, Beast­ie Boys, Fat Joe, Mos Def, and Chuck D.

Live hip hop is no stranger to Hendrix’s work as well, as one of our con­trib­ut­ors pre­vi­ously covered here on I Am Hip Hop Magazine. In a recent con­cert that was head­lined by MC-pro­du­cers Krafty Kuts and Chali 2na, Krafty opened their first set with a sample from Purple Haze, prompt­ing an ener­get­ic response from the crowd that set up the rest of the night.

Hendrix’s influ­ence on con­tem­por­ary hip hop actu­ally extends bey­ond just music­al­ity. In 2010, Drake suc­cess­fully launched his first head­lining tour titled Light Dreams and Night­mares. If those words give off a psy­che­del­ic vibe, that’s because that was Drake’s intent. He told MTV News that the stun­ning setup of the tour, which began in Miami, was without a doubt heav­ily influ­enced by Jimi Hendrix. He said, “Not neces­sar­ily in any set that he designed, but more so his music and his vibe… it’s very psy­che­del­ic.”

Even out­side the world of music and per­form­ance, you can’t escape the influ­ence of the world’s most icon­ic gui­tar­ist. Believe it or not, even the world of digit­al gam­ing is equally obsessed with the guy. Jimi Hendrix’s music is brought to life on Foxy game’s slot game on the musi­cian, which is just one of the games in its three-part series ded­ic­ated to both liv­ing and dead music­al icons. The game takes play­ers on a psy­che­del­ic ride and even fea­tures some of the gui­tar­ist’s greatest songs, such as Little Wing, Crosstown Traffic, and the afore­men­tioned Purple Haze. Stranger still is The Jimi Hendrix Case by Adven­ture Game stu­di­os, in which the play­er is tasked with solv­ing the murder of Jimi Hendrix, in a world where every char­ac­ter is named Jimi Hendrix. In this world, seem­ingly no one and every­one com­mit­ted the hein­ous crime. If any­thing, these games are trib­utes to the man’s exper­i­ment­al swag­ger and fas­cin­at­ing bravado.

These are just some of the many ways in which Jimi Hendrix’s spir­it lives on in hip hop and oth­er mod­ern media. More than 40 years after his death, rap­pers, pro­du­cers, and oth­er artists are still find­ing new inspir­a­tion in his old works – the very defin­i­tion of time­less musi­cian­ship.