Recently this year Maine The Medi­cine released his crit­ic­ally acclaimed album ‘S.O.A (Son Of Alice).’ In the in-depth inter­view below he talks about hon­or­ing his moth­er with the album, high emo­tions cre­at­ing the album, his secret ingredi­ent to releas­ing time­less music, and more. 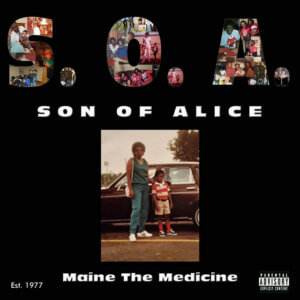 MJ: I see you and Leadgeon are still going strong, talk a little bit about that chem­istry.

Maine: Well with Leadgeon, that’s 30-year chem­istry and broth­er­hood. I don’t have to tell him what kind of beats I need, he already knows. Now lyr­ic­ally we always push each oth­er with the pen. For us, that inner com­pet­i­tion will always be there.

MJ: One thing I find when it comes to your albums it’s dif­fi­cult to pin­point one or even two favor­ite records. All your albums are theme-based and flow like a story from begin­ning to end, with no skip­ping. How­ever, I do want to touch on “Pour Liquor” as that seems to hit hard and hit home with many fans and listen­ers.

Maine: Yes, “Pour Liquor” seems to be a pop­u­lar one with the fans. I wrote that hook dur­ing the Cov­id,  because of all the friends and fam­ily I lost that year. I had­n’t got­ten a chance to write a verse to it until the night of my dad’s funer­al. I was already halfway through the album, but I needed to pay homage to my fath­er. As for the fea­ture, that’s my cous­in Khali Hustle from the Bay Area. He, like myself, lost a few people, and almost lost his own life to an attemp­ted mur­der­er. So, I’m grate­ful he’s still here to jump on this record with me.

MJ: I want to take a moment to pull on heartstrings and ask how dif­fi­cult it was to cre­ate “Momma” and the array of emo­tions you must feel hear­ing that song being played.

Maine: Yes, that song was hard to make, and at times was hard to listen to. My mom was my everything, and that void will nev­er be filled. She was a single mom, worked 2 jobs, and tried her best to provide for my sis­ter and me. She was a big fan of my music, even though she said I curse too much. But she would love to watch my videos on You­Tube. So, I just wanted to hon­or her with this album, and make her proud. Maybe one day I can com­pose myself enough to per­form it.

MJ: Both as a fan and pro­fes­sion­al in the music industry, I must say how refresh­ing it is to exper­i­ence your growth as a man and artist with each album you release. There’s a man­ner in which you invite the world into your per­son­al life exper­i­ences that allows us to authen­tic­ally embrace and grip your emo­tions. Your use of lyr­i­cism and word­play flows effort­lessly over boom-bap cadences. What is it about Maine The Medi­cine that stands out from oth­er artists?

Maine: I just try to be the best ver­sion of myself. I move off of the emo­tion and the vibe of the beat. Sure I have top­ics that I want to address,  but instead of for­cing I wait for the right track to bring it out of me. I also know as an artist I can always get bet­ter. I can always make my sword sharp­er. I nev­er con­vince myself that I made it because that can go to your head. I want to con­tin­ue to keep that hun­ger for more.

MJ: Take us behind the scenes of the album ‘S.O.A.’  Let us in from the inspir­a­tion to cre­ation to the final product. I know the album is buzz­ing with a social media frenzy and fans are listen­ing on repeat with genu­ine com­pas­sion.

Maine: The cre­at­ive part was fun and thera­peut­ic for me. I mean, of course, it was some pres­sure because this album is ded­ic­ated to my mom. But at the same time, that’s what helped it flow. When I was listen­ing to the tracks, I was think­ing who could’ve made this dope? There are so many dope artists I know that I had­n’t worked with yet, so I wanted to link with them on this album. Plus I got the few staples that are always on my albums like Leadgeon, Sus­pect,  and Tyso­ul. But I listened to this album about a hun­dred times to make sure it gave me the same feel­ing as the first time. I can hon­estly say it most cer­tainly did.

MJ: What is your secret to being able to stay afloat and cre­ate time­less music? In an era where music seems to fall into an abyss of one-hit won­ders and what’s trend­ing, there must be some chal­lenges.

Maine: I make music on how I feel and the vibe the beat gives me. I put my all into my music, and I’m not afraid of being vul­ner­able about my life. I think artists fail when they force a hit or try to sound like what’s hot. The best thing to do is to let the music come nat­ur­ally. In the pro­cess some­times you end up with a hit that you did­n’t know was going to be a hit.

MJ: I’m not sure what can top ‘S.O.A.’ but can you give us some inside scoop on oth­er pro­jects or endeavors you’re work­ing on?

Maine: It’s going to be really hard to top ‘S.O.A.’ but I’m not really sure that I want to. Because it’s such a spe­cial album, I would­n’t mind if this is my “Ill­mat­ic.” No album I do after this will ever be as spe­cial as this one. As for future pro­jects, I will stick to the same for­mula I have been using and let the mood and the beat take me on a jour­ney. I have a few pro­jects com­ing up, like the Mercy Gang EP and an EP titled ‘Iron Horse Talk.’ Leadgeon and I have an EP as well. But for now, I’m just push­ing the ‘S.O.A.’ album, and the tee shirt line we’re work­ing on with Elec­tric Frog Designs.

MJ: As we wrap up, take this time to let the world and fans know any­thing else about the album or Maine The Medi­cine

Maine: I want people to know that I put a lot of time and emo­tion into this album. I’m super honored about the response I’m get­ting off ‘S.O.A.’  The love and sup­port make me feel like I suc­ceeded in mak­ing my mama proud. The thing I want people to know about Maine is I love being cre­at­ive. I’m going to always try to give you some­thing dif­fer­ent.