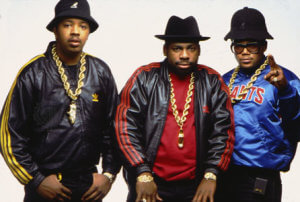 US legendary hip-hop group, Run DMC is set to return to the UK stage for the first time in three years for a rare one night only exclus­ive show on  Thursday 5th July 2018 at the Even­tim Apollo in Ham­mer­smith, Lon­don.

Burst­ing onto the scene in the early ‘80’s and widely acknow­ledged as one of the first artists to pion­eer the new school hip-hop sound; MC’s Joseph ‘Run’ Sim­mons, Darryl ‘D.M.C’ McDaniels and the late DJ Jason ‘Jam Mas­ter Jay’ Mizell, are greatly recog­nised as the most influ­en­tial and fam­ous acts in the his­tory of hip-hop cul­ture.

Achiev­ing not­able firsts in the world of hip-hop music and cred­ited as being the most respons­ible for push­ing hip-hop into main­stream pop­u­lar music,Run DMC was the first rap act to receive a Grammy Award nom­in­a­tion, a No.1 R&B chart­ing rap album, the first rap act to have a music video rota­tion on MTV and to fea­ture on the cov­er of Rolling Stone magazine; plus the first rap act to sign to a major endorse­ment deal with Adi­das. Run DMC were also the second rap act to be induc­ted in the Rock and Roll Hall of Fame.

Releas­ing their ground­break­ing debut rap album ‘Run‑D.M.C’ in 1984, the rap group scored major suc­cess with three Top 20 singles includ­ing their debut single ‘It’s Like That/’Sucker MC’s’, fol­lowed by ‘Hard Times’ and ‘30 Days’. Cata­pult­ing the group into a glob­al phe­nomen­on with an unpre­ced­en­ted sound of raw hip-hop mixed with hard rock,  on their fourth single ‘Rock Box’, would become the corner­stone of the group’s sound, pav­ing the way for the rap rock move­ment in the ‘90’s.

Run DMC’s fol­lowed up rock influ­enced album titled ‘King of Rock’ released in 1985 was greatly received spend­ing 56 weeks on the US Bill­board charts with singles ‘King of Rock’, ‘You Talk Too Much’ and ‘Can You Rock It Like This’ reach­ing the Top 20.

The group’s third and break­through album ‘Rais­ing Hell’, pro­duced by music­al geni­us Rick Rubin in 1986, trumped all per­ceived notions of com­mer­cial viab­il­ity for hip-hop music, by achiev­ing triple plat­in­um status and receiv­ing atten­tion from quar­ters that had pre­vi­ously ignored and dis­missed hip-hop music as a fad. ‘Rais­ing Hell’ became the group’s most suc­cess­ful selling album and one of the best selling rap albums of all time, peak­ing at No.3 on the Bill­board charts and achiev­ing double plat­in­um status. The lead and cov­er single ‘Walk This Way’ with Aerosmith’s lead sing­er Steven Tyler and gui­tar­ist Joe Perry scored Top 10 status in over eight coun­tries and was ranked num­ber 293 in Rolling Stone’s 500 Greatest Songs of All Time.

Run DMC con­tin­ued to pro­duce suc­cess­fully selling albums over the next 14 years with records like ‘Tough­er Than Leath­er’, ‘Back From Hell’, ‘Down With The King’ to their last stu­dio album ‘Crown Roy­al’ in 2001; releas­ing pop­u­lar hits such as ‘Run’s House’, ‘What’s It All About’, ‘Down With The King’ and ‘Let’s Stay Togeth­er’.

With over 20 years of pion­eer­ing hits, unpar­al­lelled solo suc­cess, plus col­lab­or­at­ing with the music industry’s not­able hip-hop and rock music stars from Fred Durst (Limp Bizkit), Kid Rock, Meth­od Man, Nas, Stephan Jen­kins (Third Eye Blind), and Sug­ar Ray; the legendary rap group of all time will return to Lon­don for the most anti­cip­ated con­cert of the sum­mer.