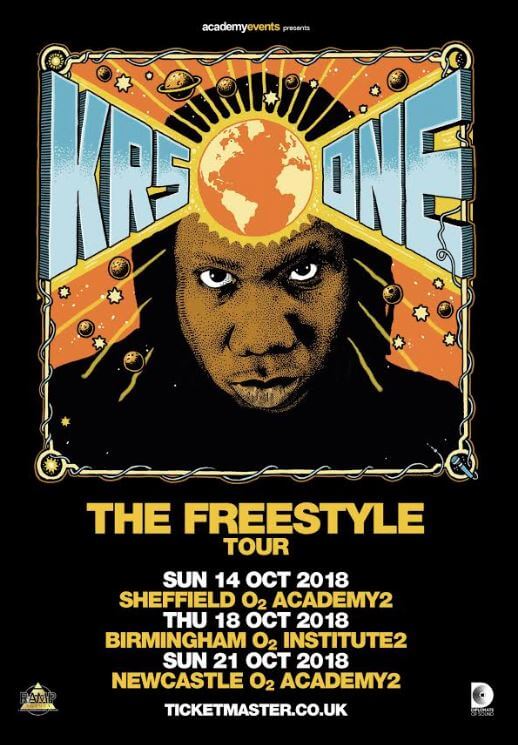 Rap icon KRS-One is bring­ing his huge cata­logue of tracks to the UK for just a hand­ful of live dates this Octo­ber, includ­ing shows at O2 Academy ven­ues in Shef­field (14 Oct), Birm­ing­ham (18 Oct) and New­castle (21 Oct). He will be joined on tour by his son Kris Park­er, also known as DJ and pro­du­cer Pred­at­or Prime, who first start­ing DJ-ing at the tender age of four­teen. His tal­ents are as diverse as his music­al inspir­a­tions and influ­ences, ran­ging from hip hop pro­du­cer “NUJABES,” J‑Dilla, 9th Won­der, DJ Premi­er and Exile to Daft Punk and of course, one of his biggest hip hop inspir­a­tions, his fath­er, KRS-One.

Hail­ing from The Bronx, MC, pro­du­cer and hip hop heavy­weight KRS-One, AKA Kris Park­er, was head honcho of Boo­gie Down Pro­duc­tions — one of the most influ­en­tial, hard­core hip hop out­fits of the 1980s. His polit­ic­al and socially con­scious raps earned him the nick­name “the Teacha” and along with his com­plex word­play, has built a repu­ta­tion as one of the most respec­ted voices in hip hop; a voice that would con­trib­ute to it being more than just a music genre.

With his DJ, the late Scott Le Rock he pro­duced some of this golden era of hip hop’s most legendary tracks (‘My Philo­sophy’, ‘South Bronx’, ‘I’m Still #1’) and fol­low­ing Scott’s tra­gic death, KRS-One cre­ated the Stop The Viol­ence Move­ment, which led to the release of the single ‘Self Destruc­tion’. After five albums with BDP, his entrance as a solo artist was explos­ive and 1993’s Return of the Boom Bap intro­duced KRS-One to the world with legendary tracks includ­ing ‘Sound of da Police’ and ‘“P” Is Still Free’. KRS-One has been cel­eb­rated as the “con­science of hip hop” (Rolling Stone), “the greatest live emcee ever” (The Source), the “spokes­per­son for hip hop” (Wall Street Journ­al), and with 20 pub­lished albums to his cred­it and numer­ous appear­ances with oth­er artists, KRS-One is believed to have writ­ten the most rhymes in hip hop’s his­tory.

This for­ward-think­ing artist con­tin­ues to push bound­ar­ies, as seen with his latest albums, Now Here This (2015) and The World Is MIND (2017). Keep­ing in line with his pro­voc­at­ive lyr­i­cism and old school flow, KRS-One puts on a show that gives every­one a taste of that golden era. Be in the pres­ence of rap roy­alty and wit­ness this major voice of hip hop, live.