I caught up with Gang­ster Gibbs dur­ing the Lon­don leg of his recent UK tour and got his thoughts on the albums suc­cess, how he’s find­ing the UK, the cur­rent polit­ic­al cli­mate In Amer­ica and why racism still exists…

Q. What’s good Fred­die? Great to see you in the UK and wel­come to Lon­don!  How have you found the UK so far?

Ah man, I LOVE the UK…Glasgow was dope last night, it was a real good show and I’m excited about tonight, tonight is sold out!

Q.  The album you’ve got out at the moment ‘Piñata’ with Madlib, it’s been out a while now, but how did that col­lab­or­a­tion first come about?

You know what man; it was some­thing that really just sprung out of noth­ing.  Madlib and myself had mutu­al friends and we all just star­ted to be cool, then it turned into a phe­nomen­on that we didn’t expect.  I def­in­itely worked hard on it, I approached it like I do all my pro­jects, like a rap ath­lete and I think I com­pleted my mis­sion, it’s selling good…it’s still selling.  I’m totally inde­pend­ent, I can actu­ally sit back and say that I did that on my own, and hope­fully I can get a Grammy nom­in­a­tion for best rap album, because I think it’s def­in­itely one of the more sol­id rap albums of the year.  A lot of guys prob­ably had big­ger singles, those type of artists, but when it comes to put­ting togeth­er an entire project…a record…I think I suc­ceeded in hav­ing one of the best of the year.

Q. It’s a clas­sic album in my opin­ion, without a doubt…

I agree, thank you.

Q. How long in the mak­ing was it?

It was…man….actually man it was a span of maybe over like, 3 years.  I was put­ting out oth­er pro­jects, I put out BFK, I put out the ESGN pro­ject, all in the whole time I was work­ing on the Piñata album.  So it was some­thing that I would go to, then go back to…it was hard to make, it was like put­ting togeth­er a puzzle, because it was some­thing that I wasn’t used to, but like I say, I think it was the ulti­mate dis­play of my ver­sat­il­ity because I got to show that I could do some­thing that nobody else in my genre was doing music wise, so it def­in­itely set me apart from oth­er street rap­pers and gang­ster rap­pers of this gen­er­a­tion.

Q. When you were work­ing with Madlib, did you both work on the beats and the lyr­ics togeth­er or did you work inde­pend­ently on your respect­ive crafts and bring the two togeth­er after­ward?

He would give me things…he def­in­itely worked on all the beats, what I would do is I would chop things and I would put things where I wanted to in cer­tain spots…it was a beau­ti­ful mar­riage, it came togeth­er great because he prob­ably sent me a thou­sand beats, y’know?  But I had to pick the best 16, well not the best 16, but the 16 that fit me the best.  There was some oth­er ones that I was like ‘wow, maybe I can attack that in a year’ or some­thing like that.  It def­in­itely sharpened my sword as an MC, as a lyr­i­cist, so I had to pick my points and really attack it like a game plan, like a foot­ball game or some­thing like that, you gotta have everything in place in order to get the win and I think that I suc­ceeded on both ends, offens­ively and defens­ively on this record.

Q. Will you col­lab­or­ate with Madlib again in the future?

Q. Going back to your roots…you’re from Gary, Indi­an and you talk about that quite a lot in your music, ‘G.I. Pride’ for example.  In the UK we maybe don’t have too clear an idea about what your town is like so can you describe Gary to us a little?

Shiiiiiit, look at this floor right here, that’s how Gary is, just fucked up man.  It’s just a run down town, it’s a ghost town.  How can I put this…it’s part of the rust belt of Amer­ica, it’s one of those towns that had a flour­ish­ing industry with­in it, it had the steel industry, like Detroit had the car industry, it was kinda par­al­lel to that.  When that industry star­ted to fail…loss of jobs…drugs, all kind of things of that nature…unemployment…economically it’s in a fucked up spot so sim­il­ar to Fer­guson, Mis­souri, sim­il­ar to East St. Louis, sim­il­ar to like I said, Detroit, sim­il­ar to Flint, Michigan, sim­il­ar to Young­stown, Ohio, the rust belt of Amer­ica y’know man?  It’s like those Mid­w­est towns that are like…it’s just do or die in a lot of those towns.

Q. Com­ing from that back­ground, do you think you can relate bet­ter than most to the prob­lems that are going on in Fer­gus­son at the moment, like you have a bet­ter vant­age point to under­stand what’s going on there with the upris­ing and the shoot­ing of Michael Brown?

Def­in­itely, because I’ve exper­i­enced police bru­tal­ity, I think a lot of black males have, espe­cially black males that come from the streets.  If you involved with the streets you def­in­itely gonna have an encounter with the police at a cer­tain point.  Some of those times you might be doing wrong, and then some of those times you might not, you might just get put in a box because you’re, you know, that ele­ment and police can…a lot of police in Amer­ica and every­where abuse their power man.  That’s a huge position…to be a police­man I mean.  You essen­tially have my life in your hands…you can kill me, arrest me, take my money, take whatever you want…and it’s my word against yours and the author­it­ies are gonna believe you, you’re an officer.  So, you know this abuse of power man…it’s ridicu­lous.  I sin­cerely don’t think they had to kill Michael Brown, I def­in­itely think there was non-leth­al ways of doing what they had to do…but, that’s Amer­ica man, and every­body got a gun.  I got a lot of guns, I wish that people didn’t have guns, I got a lot of guns because the next man got guns and I gotta pro­tect my fam­ily, that’s why I got them.  I wish that they would just out­law assault rifles or some­thing like that man, there’s no need for that shit in the neigh­bour­hood, there’s no need for that but oth­er people have them, so we have them…it’s that fear that makes you have guns.  I don’t just show my guns in my videos and shit like that just to flash them or some­thing like that, I’m show­ing you the ele­ment we’re in.  We’re def­in­itely bold and brave and cour­ageous, but deep down we afraid man.  We’re outnumbered…we are the minor­ity, and it’s that fear that eats up our com­munity, that’s why we hurt each oth­er and do so many bad things to each oth­er man, we are afraid.  We are out­numbered in Amer­ica, we come from slaves y’know?  And we had a men­tal­ity injec­ted in us that’s been car­ried on for 500 years in that coun­try.  I hate to say it but they’ve broken a lot of us, they’ve broken our fam­il­ies because that men­tal­ity gets passed on gen­er­a­tion to gen­er­a­tion to gen­er­a­tion.

Q. That must be sad to see…

It stopped with me, it def­in­itely stopped with me.  I am free of the slave men­tal­ity, I don’t sub­mit or suc­cumb to any­body and they’re way of think­ing, I’m fully aware of myself, my pres­ence and my worth and most black people aren’t and they need to be.  They need to real­ise their self-worth and the things that they can bring to the table and it will build their self-con­fid­ence and then break their slave men­tal­ity.  That’s what’s killing us in Amer­ica, that men­tal­ity from 500 years back.  The powers that be they look at it like ‘ite, its fucked up y’all doing this, we gotta pun­ish you pun­ish you’, but you instilled that in us, they instilled that shit in us, that slave men­tal­ity, those politi­cians, police, over­seers, all that shit is his­tory repeat­ing itself, that’s all.

Q. What’s next for you…your album East Side Slim?  Is that still com­ing?

I think that’s gonna be a mix­tape, my albums gonna be called Life­styles of the Insane, that’s gonna be com­ing out in April…April or May I dunno, I got a baby on the way so I gotta pick and choose when I’m gonna drop my album.

Q. Con­grat­u­la­tions! When’s the baby due?

The baby drop­ping April…the baby got a release date before the album!

Q. So we can expect the new album next year some­time?

Yeah next year some­time, in the spring or the sum­mer, I’m def­in­itely gonna come with a new pro­ject.  I’m prob­ably gonna drop a tape or some­thing before the end of the year.

Q. Excel­lent, you’re mix­tapes are always worth look­ing out for…

I’m def­in­itely gonna feed the appet­ite of the people, y’know what I’m say­ing?! 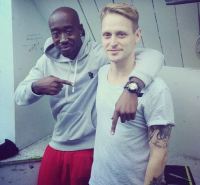