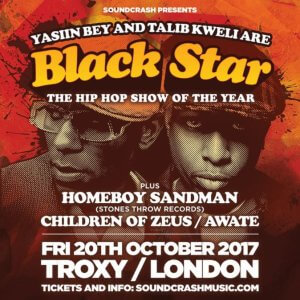 The Hip Hop show of the year…

Black Star, made up of hip hop heavy­weights Yasi­in Bey (aka Mos Def) and Talib Kweli, are fly­ing in straight from The States to deliv­er a mon­strous show for the always eager Lon­don hip hop crowd. This upcom­ing show breaks London’s three-year dry spell of the legendary duo, mak­ing it a rare, must-see hip hop event of the year.

Black Star rose from the under­ground move­ment in the late 1990s with the release of album “Mos Def & Talib Kweli are Black Star,” now hailed as one of the greatest hip hop albums of our time. Since then, these hip hop mas­ters have been spit­ting lyr­ics and drop­ping beats that have helped shape under­ground altern­at­ive hip-hop, bring­ing it fur­ther into the main­stream eye.

Titans of hip hops in their own right, Yasi­in Bey and Talib Kweli have indi­vidu­ally built up  a wealth of exper­i­ence in their solo careers. Between them, they have col­lab­or­ated with the likes of Gor­ri­laz, Kanye West, Just Blaze, Phar­rel Wil­li­ams and more, mak­ing their names truly legendary in the industry. Once togeth­er, these legends are set to bring the house down.

Join­ing them on the Troxy stage will be born and bred New York­er Home­boy Sand­man from hip hop label Stones Throw Record, as well as the UK’s very own Chil­dren of Zeus and Awate. Expect razor sharp lyr­ics and floor shak­ing beats that will keep you on your feet all night long.

Since their last per­form­ance as Black Star in 2014, Bey and Kweli have been teas­ing fans with the idea of anoth­er show togeth­er. Now, three years later, it’s finally hap­pen­ing. Lon­don­ers, brace yourselves for what will be a very spe­cial one-off show. Don’t miss out.