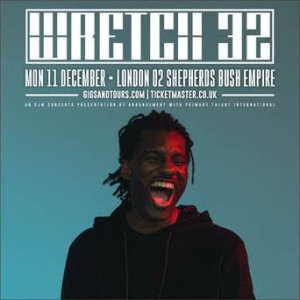 In cel­eb­ra­tion of his highly anti­cip­ated new album ‘FR32’, one of the UK’s most cel­eb­rated MCs, Wretch 32 has announced a huge head­line show at London’s O2 Shep­herds Bush Empire on Monday 11th Decem­ber.

Play­ing on Wretch’s stage name, FR32 is much more than just an album title. While the sig­ni­fic­ance of the num­bers 3 and 2 weren’t too com­plex to begin with — they were simply Wretch’s lucky num­bers — they went on to become a rep­res­ent­a­tion of free­dom in the Tot­ten­ham rapper’s mind. And now with an album that fully expresses where he is in mind, body and soul, his wan­der­ing spir­it is lib­er­ated through some of the most hon­est music he’s ever made. Touch­ing on everything from fam­ily issues and rela­tion­ship struggles to future goals and find­ing inner peace, this might just be his most focused pro­ject to date.