Jay Dee Made This 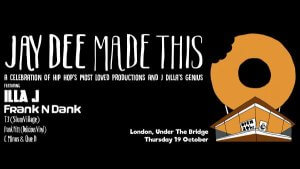 Without a doubt, Hip Hop wouldn’t be what it is today without Jay Dee / J Dilla’s icon­ic work. His unique deliv­ery – wheth­er as a pro­du­cer, MC or song­writer – brought him legend-status even before he turned 30.

Respons­ible for most of the Golden Era Hip Hop and Neo Soul clas­sics, J Dilla’s name is right there – and right­fully so – with the likes of Com­mon, A Tribe Called Quest, Slum Vil­lage, The Roots, The Phar­cyde, Madlib, Nas, Erykah Badu, D’Angelo, Bilal – and that’s just scratch­ing the sur­face.

Ever since his death, in 2007, count­less trib­utes have cel­eb­rated his enorm­ous leg­acy, but it’s not nearly enough. “Jay Dee Made This” is a new concept, com­piled by close friends and the fam­ily of J Dilla, to cel­eb­rate his life, work and artist­ic geni­us. This is the per­fect oppor­tun­ity to bring togeth­er the sol­id com­munity of hip hop heads to pay homage to Jay Dee, one of the greatest to ever do it! 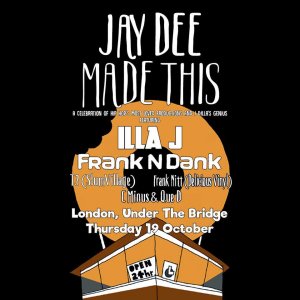