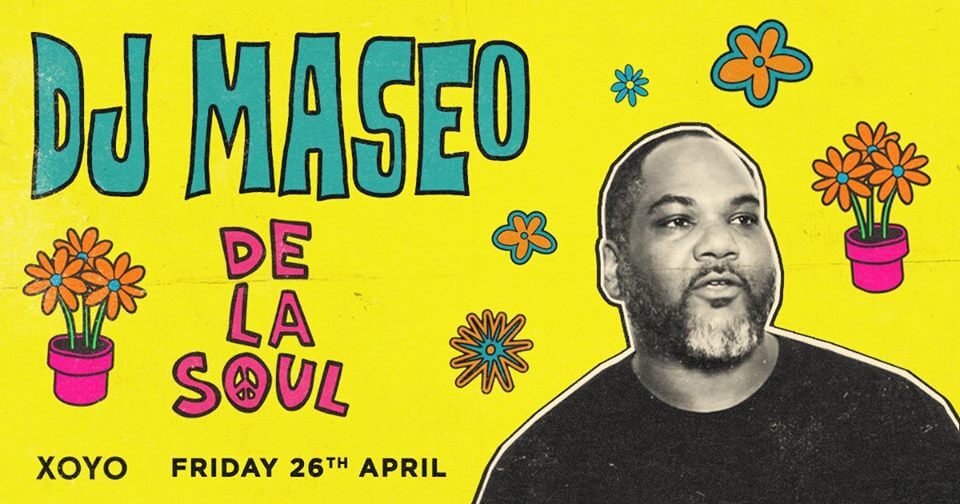 One of the most icon­ic hip-hop bands of all time, it’s an hon­our to wel­come back one third of the legendary De La Soul DJ Maseo for a night of hip-hop, rare groove, disco and (of course) soul.

Maseo’s pro­duc­tions for De La have always tra­versed the more soul­ful end of the hip-hop spec­trum (see ‘Eye Know’ and ‘Ring Ring Ring’ for starters), and with 2016’s And the Anonym­ous Nobody… and new bits with Tom Misch, he’ll have plenty of fresh music to pick from in his record bag.

Fol­low­ing in the main room is Andres AKA DJ Dez Andres. After relo­cat­ing to LA as a young child, Andrés honed his DJing skills play­ing parties through­out his teens, and by the time his fam­ily moved back to Motor City he was a bon­afide DJ and bril­liant select­or. Although his DJ roots are in hip-hop, his house pro­duc­tion skills were picked up by Kenny Dix­on Jr. – AKA Moody­man – where he has had mul­tiple house releases on the pres­ti­gi­ous Mahogani Records. He now owns his own label ‘La Vida’ which he launched in 2012 with his own 12” single ‘New For U’, which ranked no. 1 in Res­id­ent Advisor’s poll of 2012’s top 50 tracks.