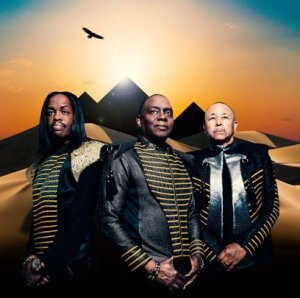 One of the most acclaimed and com­mer­cially pop­u­lar bands of all time, Earth, Wind & Fire are the first act announced for this summer’s Love Supreme Jazz Fest­iv­al. With record sales in excess of 100 mil­lion and an array of achieve­ments and awards to their name — includ­ing the Grammy Life­time Achieve­ment Award and induc­tion into the Rock & Roll Hall of Fame — the band have made a pro­found, last­ing impact on pop­u­lar cul­ture and return to the UK for the first time in two years to head­line the clos­ing night of this year’s fest­iv­al.

The 10-piece band, led by ori­gin­al mem­bers Philip Bailey, Verdine White and Ral­ph John­son, will bring their thrill­ing live show to Glynde Place in East Sus­sex on Sunday July 1st, draw­ing on a rich cata­logue of music that includes an array of inter­na­tion­al hit singles includ­ing ‘Septem­ber’, ‘Boo­gie Won­der­land’, ‘Let’s Groove’, ‘Shin­ing Star’, ‘Fantasy’, ‘After The Love Has Gone’ and many more.

“We’ve been cov­et­ing Earth, Wind & Fire since the fest­ival’s incep­tion. They’re a phe­nom­en­al live act with an incred­ible back cata­logue of songs and we know they’ll be a massive hit with the Love Supreme audi­ence. Hav­ing sold over 100 mil­lion records across the course of their career they are also the biggest act we’ve booked for the fest­iv­al to date and will provide a fit­ting finale to this year’s event.”

Return­ing for its sixth edi­tion from June 29th – July 1st, The Love Supreme Jazz Fest­iv­al, which enjoyed its most suc­cess­ful year to date in 2017 with 40,000 in attend­ance across the week­end, will announce addi­tion­al names next month.

Tick­ets for this year’s fest­iv­al start from £54 are on sale now and avail­able from www.lovesupremefestival.com.

Event: THE LAST POETS LIVE AT THE JAZZ CAFE (@TheJazzCafe)