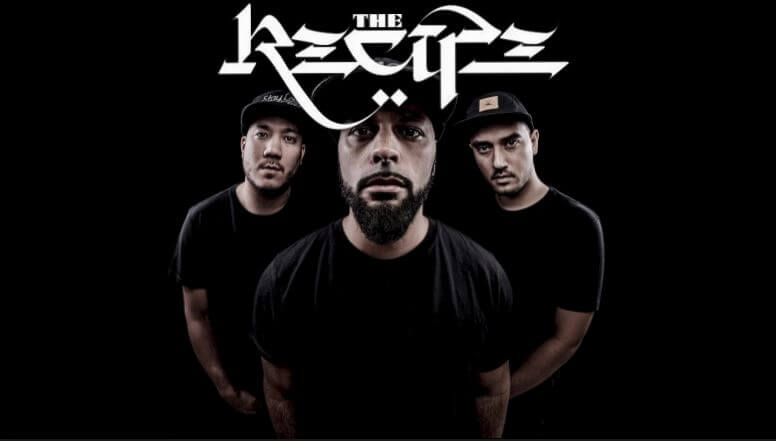 Tell us about how The Recipe star­ted – who is a part of the col­lect­ive and what do you bring to it?

The Recipe began in 2008 as a com­pil­a­tion to show­case the city’s emer­ging hip-hop scene. The aim was to bring togeth­er all the artists in the UAE, give them pro­duc­tion, a stu­dio and a final product. The only con­di­tion was that in order to fea­ture on the album, you had to col­lab­or­ate with anoth­er artist on the pro­ject. There were 14 of us in total and when we dropped the pro­ject, people star­ted call­ing us a group and star­ted book­ing us as The Recipe. Today the group con­sists of 3 rap­pers Swerte, Kaz Money & P.Storm.

Whilst you are based in Dubai, where are you from ori­gin­ally and how has this influ­enced the music you make?

We’re all pretty mixed, Swerte is half Swiss half Indone­sian, Kaz is Itali­an, Syr­i­an, Erit­rean and Armeni­an and P is half Brit­ish, half Chinese.  Kaz was born and raised in Abu Dhabi, P came to Dubai at a very young age and Swerte came to Dubai around 12 years ago. Our music is influ­enced by the city and our cul­tur­al back­grounds. With our mixed back­grounds, we speak for a huge pop­u­la­tion of 3rd cul­ture kids that don’t really have a home. We’re for­eign where we’re at but also for­eign where we’re from.

When we think Hip Hop, we think com­munity, expres­sion and being a voice for the voice­less. Many people don’t under­stand how Dubai which is seen as highly mater­i­al­ist­ic can pro­duce an authen­t­ic Hip Hop cul­ture. For those who feel this way… Tell us a bit about the scene there and what you have been build­ing?

Like everything else if you fol­low main­stream media, you get main­stream mater­i­al. The way Dubai is por­trayed to the world in some places can be fairly accur­ate but we usu­ally laugh at the shit we see out there. There’s a huge pop­u­la­tion of people that grew up here and have this city as home. It’s not all Bent­ley’s and pop­ping bottles. We still have lives to live and mouths to feed. The scene here is young and with so many people in trans­it here it’s always hard to really lay the found­a­tion and grow things organ­ic­ally but it’s start­ing to shift as so many of us have grown up here and call this home. We do have our extremes here, you got the super-rich, you got the super poor and everything else in between and every­one has a voice. I mean rich people have prob­lems too right? Lol… 10 years ago we sort of paved the way and lay the found­a­tion for oth­er artist in the coun­try, from radio, TV & print, to live shows and open­ing up for big inter­na­tion­al acts. We turned some­thing that was extremely rare into some­thing more com­mon and accept­able.

You have opened for a num­ber of acts, includ­ing UK Rap­per Stormzy. What was this like?

Per­form­ing in gen­er­al is dope. There’s no oth­er feel­ing like it in the world. As a group we pride ourselves on a dope live act. Open­ing for big artist is always super dope because they bring a huge crowd that most upcom­ing artist could nev­er really draw in. That night open­ing for Stormy was big, huge crowd, rowdy as hell. We’ve been blessed to be able to open for so many huge artists over the years. I mean you’re walk­ing on the same stage as ‘gods’ you know you? We look­ing down on the floor dur­ing the per­form­ance and see­ing Snoop dogs set list taped to a speak­er. It’s crazy. Like being on stage before Mobb Deep then watch­ing them per­form while just a few hours ago we were in a stu­dio ses­sion togeth­er banging out a record, it’s hard to explain that feel­ing and the dif­fer­ent per­spect­ive you see it from.

There have been many debates about an artist’s social respons­ib­il­ity when it comes to influ­en­cing the youth. What are your thoughts on this?

Social respons­ib­il­ity is tricky espe­cially in hiphop. Look at what we talk about in the music and then we give back to the com­munity. Some­times it can be con­tra­dict­ory. Like how does a kid pro­cess the inform­a­tion? In today’s social media age where every move is doc­u­mented, should we be more respons­ible and care­ful with what we put out there? It’s tricky, we’re human, we aren’t per­fect but not being per­fect sells.

What is your “recipe” to the per­fect Hip Hop track?

A dope beat that gives you that someone just far­ted face and some good bars. Hiphop is so diverse now, there’s a dope track for every kind of feel­ing and emo­tion out there. Whatever it is from that raw hiphop to ‘mumble’ rap there’s some­thing dope out there for every­one. Whatever it is, as long as it comes from some­thing real and not forced and fake.

Big­gies Mac 11 fea­tures Mobb Deep, one of them mem­bers Prodigy we sadly lost last year. What was it like work­ing with such legends?

How do you explain it? It’s hard. We grew up to these guys, we can recite their music back­wards, we aspired to be them in the hip-hop world. Then the next second you’re in a lift with them talk­ing shit and walk­ing into a stu­dio to make music togeth­er. It was the exact same feel­ing work­ing with Talib Kweli, like yo we’re in the hood on a roof top with Talib Kweli shoot­ing a music video. Some­times it takes a minute to sink in, you get a bit star struck and it’s a bit sur­real and you don’t want to say any­thing stu­pid and look like a fan and then boom it’s your turn on the mic. Time to work! But I think the most import­ant takeaway from it was a val­id­a­tion that we stood next to legends and we held our own and they looked at us like ‘yo these boys are for real.’ What more could you ask for? You stand next to some of the greatest to ever do it and get that con­firm­a­tion that everything you’ve been work­ing towards, the count­less hours you spent on your craft etc is pay­ing off and you are legit.

Tell us a bit about your album ‘Funer­als & Pur­gat­ory’? You have some big fea­tures on it… talk us through the pro­cess of cre­at­ing it.

Funer­als & Pur­gat­ory was our first ‘offi­cial’ album. Pri­or to that was just hun­dreds of tracks and mix­tape, etc. We took a break for a few years and this was our first body of work togeth­er as a group that we put out offi­cially on all plat­forms with vinyl in store as well. It’s 11 tracks, short and sweet and a re-intro­duc­tion to the world. We spent years doing this and learn­ing the busi­ness side of things and the right way to go about things and this product is a res­ult of that. We linked up with an old homie who is now based in Lon­don Brvnjes and he pro­duced the whole album. The album had a lot of mean­ing behind it. We killed ourselves to get to this point and we’re sit­ting in pur­gat­ory wait­ing to see if it will be heav­en or hell? Pur­gat­ory was also our middle ground, a bal­ance in sound. We grew up in the golden era of hip-hop but exist in today’s world where the sound is com­pletely dif­fer­ent, so we found this middle ground between both worlds and came up with an ori­gin­al sound­ing album that really fits who we are. That’s one of the dopest takeaways from this album. A lot of people have said it’s super dope because there isn’t any­thing else out there that sounds like this. We also man­aged to get Talib Kweli on the album which was huge as well as an old homie Spark Mas­ter Tape who’s been out there killing it.

What are your thoughts on the cur­rent state of Hip Hop? In an era of mumble rap, do you see this as a point of evol­u­tion or are these artists det­ri­ment­al to the Hip Hop cul­ture?

The cur­rent state of hip-hop is amaz­ing. We’re on top of the world. Hip-Hop is no longer a side genre. It’s in everything. For every mumble rap artist out there, there’s a dope lyr­i­cist. There’s so much to choose from. If you’re com­plain­ing about mumble rap, why is it even show­ing up on your feed? Same goes if you’re com­plain­ing about people being to lyr­ic­al. No one will ever be happy. People com­plained about MC Ham­mer, people com­plained about 50 Cent, Lil Wayne, the list goes on. It’s funny though, because people who com­plained about 50 cent in 2003, now hear an old 50 record play­ing and be like ‘oh I miss the old days.’ The fact that hip-hop is involved in so many aspects of reg­u­lar life no ways from the lan­guage to fash­ion, film etc. shows a huge evol­u­tion and every­body con­trib­utes to it.

What has The Recipe got in store?

We’re going to keep drop­ping singles until the end of the year and just keep stuff mov­ing. A lot more music, a lot more visu­als and some dope col­lab­or­a­tions. The key for us is con­sist­ency, so we’re going to con­tin­ue work­ing and try­ing to build this name and fan base.