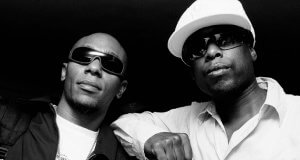 ‘Mos Def and Talib Kweli are Black Star’ is con­sidered by many to be one of the greatest albums in the his­tory of Hip Hop music. At the time of release, it brought togeth­er 2 of the hot­test under­ground lyr­i­cists and encap­su­lated the resur­gence in Afro­centric, polit­ic­ally aware Hip Hop and Neo Soul of the late ‘90s that both emcees were at the centre of along­side the likes of Com­mon, Erykah Badu, The Roots and Dead Prez.  It feels strange to talk about either Mos Def (now Yasi­in Bey) or Talib Kweli as ever being under­ground, see­ing the astro­nom­ic­al suc­cess both have had since, but a lot of that is due to the incred­ible found­a­tion they set for them­selves with the only Black Star album they’ve ever recor­ded, and like any clas­sic, it sounds as fresh today as it did back when I first heard it.

The impact and reach of the album was clear when I walked through the door of the Troxy on Octo­ber 20th and firstly saw how full it was, then walked around and saw a crazy amount of import­ant fig­ures of the UK Hip Hop scene. The place was so crowded that when look­ing on social media the next day there was actu­ally as many people I didn’t see as the ones I did, all post­ing pic­tures and clips of the show.

Due to oth­er com­mit­ments I got there a bit late and didn’t man­age to catch the dope sup­port­ing acts Awate and Home­boy Sand­man, but my broth­ers that I met there assured me that both had put it down, Awate rep­pin’ for Lon­don as always and Home­boy Sand­man sig­ni­fy­ing an example of the gen­er­a­tion of  US emcee inspired by Black Star.

Luck­ily enough I got in just before the main event. The show was so full that the front lay­er of the crowd had been sealed off. I man­aged to get to the front of that bar­ri­er and got a good spot to see the show. Yasi­in Bey and Talib Kweli came out to a deaf­en­ing reac­tion from the crowd. The stage was lit in a dope way and graph­ic setup on the screen behind them really fit the atmo­sphere. The stage was set for an incred­ible show.

Unfor­tu­nately, some­thing had gone wrong with the sound. At times the tunes were barely recog­niz­able, a few times the artists had to dir­ect the sound-man to fix cer­tain things and at one point they were shar­ing a mic. But still, the tech­nic­al dif­fi­culties weren’t enough to kill the vibe. Both Yasi­in Bey and Talib Kweli are seasoned per­formers and they brought enough cha­risma and stage pres­ence to keep the crowed on it through the whole per­form­ance – by the end, Yasi­in Bey was hand­ing out roses to the ladies at the front; pure show­man­ship. They reeled through a ridicu­lous set of clas­sics from two incred­ible solo careers, col­lab­or­a­tions between the two on each other’s pro­jects and, of course, mas­ter­pieces from the Black Star album like ‘Thieves in the Night’, ‘Astro­nomy (8th Light)’, ‘Brown Skin Lady’, ‘Defin­i­tion’ and ‘Re: Defin­i­tion’. When they dropped my favour­ite track ‘Res­pir­a­tion’ I was going wild along with most people inside.

I thought hear­ing that track would be the high­light of the night, but just as the show was com­ing to an end, a spe­cial guest was announced. Now this is some­thing that hap­pens a lot, and when they said it, I thought it might be a UK legend, as there were a lot of them in the audi­ence. I nev­er thought it would be who it was…Wu-Tang founder the RZA. Every­one in the Troxy went nuts. RZA made the point him­self that he had nev­er col­lab­or­ated with either Kweli or Yasi­in Bey, and them shar­ing a stage was long over­due. The trio put bars down over Wu joints and gave the people who’d come out some­thing to prop­erly talk about and remem­ber. It was a wild end­ing to a dope event.

An emcee, beat­maker, film­maker and writer from Lon­don with Gren­adian roots, Apex Zero has spent his life learn­ing and liv­ing Hip Hop cul­ture, using it to inspire and affect change. Based in Beijing for a few years and reg­u­larly tour­ing the globe, Apex is well trav­elled, and uses the les­sons this provides to inform his art and out­look. He is a mem­ber of the Glob­al­Fac­tion digit­al pro­duc­tion house and the inter­na­tion­al Hip Hop col­lect­ive End of the Weak.

An emcee, beatmaker, filmmaker and writer from London with Grenadian roots, Apex Zero has spent his life learning and living Hip Hop culture, using it to inspire and affect change. Based in Beijing for a few years and regularly touring the globe, Apex is well travelled, and uses the lessons this provides to inform his art and outlook. He is a member of the GlobalFaction digital production house and the international Hip Hop collective End of the Weak.