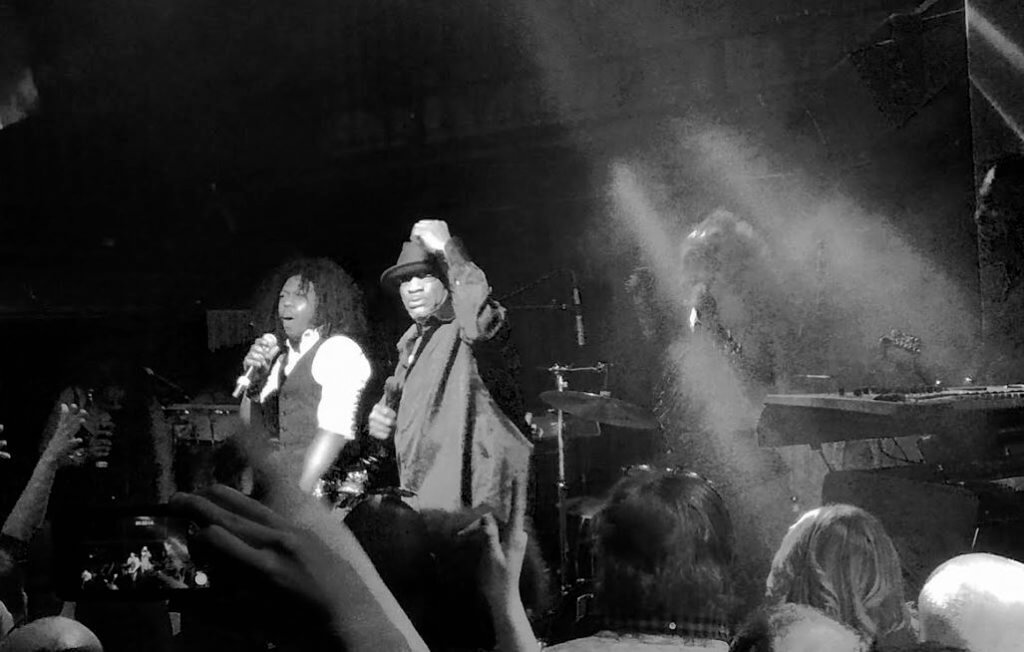 So I anti­cip­ated this sold out per­form­ance with a great nos­tal­gic feel­ing in my bones, I was about to see a legend right!

This was Alexander’s 3rd night in a row at The Jazz Café. His band were awe­some- I love a live band! They warmed up for his entrance, and on he came, wear­ing a what I call an old romantic’s style shirt, and a red feath­er in his hat to match!

He began by prom­ising to take us on a music­al jour­ney, open­ing the hour-and-a-bit long set with ‘Hearsay’, the crowd were here for him indeed, singing along with pas­sion, and smiles on their faces!

He livened it up some more with his next gem; ‘What’s miss­ing’ – a favour­ite of mine. There were a few squeals from the audi­ence when he fol­lowed with ‘Sen­ti­ment­al’.

Alex­an­der was very smi­ley & inter­act­ive; he took a seat on a stool, and swooned us with ‘Won­der­ful World’, adopt­ing a more gruff, deepened voice- in the style of Louis Arm­strong, and did a lovely job! Again, we were all singing along by the end! (we were prob­ably singing for most of the night to be fair!)

Mr O’Neal then con­tin­ued pleas­ing his fans, singing ‘If You Were Here Tonight’, …the crowd went off!

Step­ping off stage to refresh, and prom­ising to be back soon, his band stepped in and intro­duced them­selves, enter­tain­ing us with a great ver­sion of Earth, Wind & Fire’s ‘Septem­ber’. Then back he popped, politely ask­ing one of his sing­ers to help him sing the next two songs, telling us he ‘Nev­er Knew Love Like This’ and called out his ‘Sat­urday love’ …. Fin­ish­ing with the well-known and well loved ‘Cri­ti­cise’ He said his good­byes and went off stage, but I had a feel­ing he would be back on for one more! YES!! I guessed/hoped it would be …. ‘Fake’ -baby!!

And there you have it…I have a gripe with sound at gigs some­times, when the band is louder than the mics; the sound could have been turned up on the micro­phones for sure ‑which was the gen­er­al con­sensus, how­ever, we all knew the songs! It was fun, his voice is still char­ac­ter­ist­ic of the sound we know and love, he was thank­ful to the audi­ence and told us his fans in Eng­land are very spe­cial.

The band were live, they filled the room with energy, would have loved to hear ‘All True Man’…… The strong and sens­it­ive type! How­ever, I saw an all true legend!

Sally Mur­row aka Sal­freckles is a Lon­don­er who works in early edu­ca­tion, she has a back­ground in graph­ic design and finds inspir­a­tion for her art from hip hop rhymes and cul­ture.

Latest posts by Salfreckles (see all)

Sally Murrow aka Salfreckles is a Londoner who works in early education, she has a background in graphic design and finds inspiration for her art from hip hop rhymes and culture.