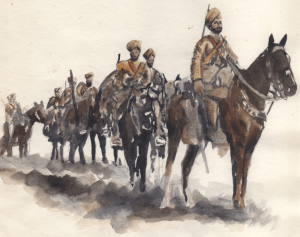 Around the same time that the Power Rangers were mighty

Went to Cam­ber Sands with my fam­ily in 2001, I know it sounds tacky

He was born in Lahore, which is now part of an Islam­ic repub­lic thanks to what the Brit­ish then insisted

At one time it was the cap­it­al of the Sikh king­dom where Muslims, Hindus and Sikhs finally coex­is­ted

But the Brit­ish Raj invaded, divided and raped the land to force us to build a new com­munity

Des­pite this, I don’t believe racism is exclus­ively giv­en from one eth­ni­city

So how are you telling me to go back to my own coun­try when it’s this coun­try that gave me every right to be here?

Just like me, ‘Jaggi’ feels he doesn’t have a home­land – the place where you tell him to go doesn’t want this Singh

Because the gov­ern­ment of the coun­try that he was born in took that land away 70 years ago.

Poetry: ‘Amid The Buzz Of The Train Tracks’ by @NarkiP